Ignorance is Dangerous. So is Standing Up Against It.

This is the second post in a row that I've started with a disclaimer. That seriously has to stop.

I'm going to post some photos in here that might be disturbing to some. If you don't think you can handle the image of a man's face that appears to have another (purple) face protruding from it, do not scroll down. Go read my entries on travel or politics or even general chaos, but do NOT scroll down.

My fellow Motherhood: From Egg to Zine mama, Tanya Ruckstuhl-Valenti, was in the middle of reading her piece at the Hugo House during our performance in January when she realized she had a major f-bomb (the dirty, dirty kind) in her essay... and someone had brought their kids to the show. "I'm going to edit this word," she explained, "because I see there are children in the room. Instead, I'll say 'FIRETRUCK.'"

Thank you for that substitution, Tanya. It will come in handy as I write this post. I have some very nice readers, and I wouldn't want to drive them off with my firetrucking language. I will be dropping that other, homophobic f-bomb again, as well. You've been warned.

If you are still reading, you are ready to see what Mr. Wright's face looked like this morning. Witness: 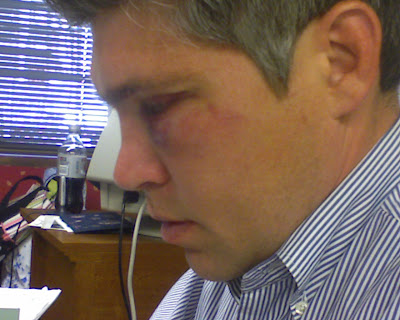 Oh, but the front view is even better! 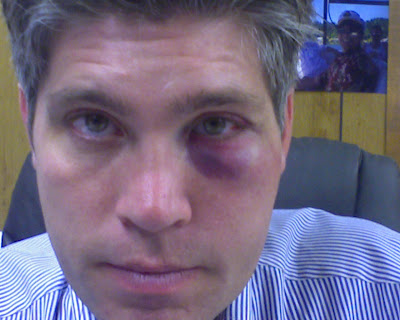 What is that? What is that huge swelling on the side of his face? Is it another face? Has he morphed into the Elephant Man? He calls it a "mouse." I call it "firetrucking awful to look at."

Needless to say, I am not happy about this; especially since this post was supposed to be about the fabulous new shoes that Mr. Wright got me for our anniversary. Shoes, however, will have to wait.

I alluded to this drama in my last post, but I didn't want to write it all out until we talked with the police, lest it interfere with the investigation. The report has now been filed.

By the way, I hesitated to post this, because I was afraid of what YOU (#1) would do with it. However, I refuse to allow your presence to dictate my First Amendment rights. I can't dictate your behavior, and if you can't act like an adult by now, that's too bad.

Last night, Mr. Wright and I went to a place we'd never been for a drink and dancing. One drink, and a little dancing. I noticed, from the dancefloor, that there was a creepy Lurker Dude watching me from the DJ booth. He had a friend with him in the booth; a Ballcap Loser. They had another friend, Tattooed Necklace Punk.

Anyway, Lurker Dude just kept staring and staring at me while we were dancing. I mean, yucky staring. Leering. I finally just turned around and danced with my back to him.

Mr. Wright looked hawt in his suit, as always, and I was looking pretty good in my funky retro dress. I must say, we were a little out of place among the ratty jeans and tattered t-shirts, but we got our groove thang on and tore up the dancefloor.

About an hour after we arrived, we made our way outside to the curb, where our rig was parked. A nice Asian guy followed us out and asked us where we were from. He showed us pictures of his kid and we chatted for a few moments. I fetched a copy of Gonzo Parenting for him to take home with him. About that time, Tattooed Necklace Guy came out. Nice Asian Guy stopped him and said, "Hey, you should take a look at this zine. She publishes it, and she has a website and stuff."

Tattooed Necklace Guy took the zine, saw the cover, and said, "Can I have this?"

"Well, I just gave it to Nice Asian Guy," I said. "It's his." Tattooed Necklace Guy took it anyway, and started to walk off.

Pay attention, now, because things moved really fast from here on out.

Lurker Dude came out, walking quickly to catch up with Tattooed Necklace Guy. As he passed me, he said, "I can't believe you're going home with that faggot."

He stopped, turned, and headed toward me. "You got a problem with me calling this guy a firetrucking faggot?"

Honestly, I thought the guy was a douchebag. I didn't know he was dangerous. I just thought he was a drunken douchebag. "Don't talk to me like that," I said, "and don't use that word. It makes you sound like an ignorant firetrucking douchebag."

By this time, Mr. Wright was standing protectively by my side. Lurker Dude said, "What? Is your GUY going to do something about it?"

And then, he hit Mr. Wright. He hit Mr. Wright's beautiful face. As if that wasn't enough, Tattooed Necklace Guy grabbed Mr. Wright from behind, around his neck, and held him while Lurker Dude hit him again and again in the face.

Mr. Wright started to get away, and Ballcap Loser showed up from nowhere and beat him in the chest, hard. When Mr. Wright tried to get away again, Tattooed Necklace Guy hit him from behind.

I want to tell you this, readers: Mr. Wright is not a pussy. Mr. Wright is a strong, strong man; and I don't mean that in that Rick Astley kind of way. But, seriously? Three guys on one? Hitting from behind? Holding a guy so other guys can beat his face in?

Why did Mr. Wright's neat, clean appearance so enrage these guys? Why did his professional dress qualify him, in the minds of the ignorant losers, as a "faggot" that needed to be beaten?

The police officer assigned to our case is following up on the information he's received. The guys, it is believed, immediately after proving their masculinity by acting like firetrucking cowards in a three-on-one fight, went to a casino, where video survellience is used.

I sincerely hope that the prosecutor will push this forward as what it is - a hate crime - if the guys are located and arrested. Hate crimes in Washington State are a class C felony, and prosecuted as a crime separate from any other crime arising from the incident.

As I was writing this entry, I received a notice that one of my email subscribers unsubscribed after reading my last post. Meh. Some people are uncomfortable with seeing those who would take another's freedom or happiness confronted.

I get that. If you must leave, I wish you well.

In other news, did I mention I got new shoes?

Blurted by Christina-Marie Wright at 1:09 PM

Email ThisBlogThis!Share to TwitterShare to FacebookShare to Pinterest
Labels: FIRETRUCK FIRETRUCK FIRETRUCK, hate crimes, hell no... this won't be in the newspaper, poster child for forced sterilization, rants, when animals attack