A Crash Course in Satire and Why Sterilization Doesn’t Work 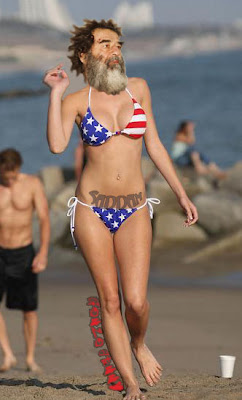 Someone named Judy Brezina of Carlton, Washington thinks I have no business calling myself a writer. She said as much in her May 14, 2009 letter to the editor of the Lake Chelan Mirror.

I have more than enough publishing credits to claim otherwise, but to each her own opinion. Speaking of which, a Google for “Judy Brezina” revealed a pretty impressive list of publishing credits for her, as well. Of course, they were all enraged letters to the editors of various newspapers, but I’m no snob. They totally count! Perhaps Ms. Brezina should write her own column, although satire and humor are clearly not her strong points.

For those not possessing the extensive vocabulary that Brezina does (“imbecilic,” “ignorant” and “insensitive” are all pretty big words, and nicely alliterative, to boot), the word “satire” is defined by Merriam-Webster’s (Brezina’s dictionary of choice) as: 1: a literary work holding up human vices and follies to ridicule or scorn; 2: trenchant wit, irony, or sarcasm used to expose and discredit vice or folly.

Did my column on Guantanamo Bay and bikinis not hold up the human vice of vanity and the follies of the detainee situation to a high enough standard of ridicule, Ms. Brezina?

Let’s take a look at the “gonzo” definition Brezina plucked from Merriam-Webster’s: 1: idiosyncratically subjective but engagé; 2: bizarre; 3: freewheeling or unconventional especially to the point of outrageousness. Brezina asserts that The Gonzo Mama column fits only the “bizarre” definition. I say she’s not giving me enough credit for living up to my name.

1. “Engagé” sent my spell-check feature into fits. I went back to Merriam-Webster.com to make sure I’d spelled it correctly and—I must admit—to get a proper definition. Ironically, Merriam-Webster failed to locate a definition. Dictionary.com, however, gave me this: (adj.) actively committed, as to a political cause.

What’s my cause? Drawing attention to human rights issues. Denouncing the laissez faire attitude of those who think the activities at Gitmo are of no concern. Shining a spotlight on societal standards which pressure women to fit an unrealistic ideal. It’s all in my piece, and it’s too bad Brezina lacks an appreciation for the satirical delivery. Make no mistake – I am serious about human rights. I don’t wear diamonds. I seek out fair trade companies. I cried when Converse was acquired by Nike, and I’m holding on to my circa 1990 Chuck Taylors until they disintegrate.

3. “Freewheeling or unconventional… to the point of outrageousness.” Excuse me, Ms. Brezina—are you not outraged?

Perhaps it’s inaccurate to say Ms. Brezina suggested I should be sterilized, but that’s the implication I took from her statement “…we should be extremely careful about overpopulation. Ms. Wright seems to be very proud of her ability to procreate. Personally, I don't think it's such a hot commodity. That's why God gave us the brains to control ourselves.”

Of all the barbs contained in Ms. Brezina’s letter, that particular statement incited the fiercest responses from The Gonzo Mama’s fans. The supportive replies flooded my inbox, popped up on Facebook, and planted themselves on both TheGonzoMama.com and LakeChelanMirror.com.

Most leaving comments denouncing Brezina’s letter are people who actually read my column – a credential Brezina herself clearly cannot claim. That’s why my regular readers were able to cry foul on her statement: They know that I gave birth to only one child.

I am, in fact, very proud of my ability to “procreate.” That is, the ability that allowed me to birth my son almost fifteen years ago. I’m proud, too, of surviving cervical cancer and other health issues that make my birthing another child a medical improbability. Does Ms. Brezina mean to vilify me for producing a single child?

I am equally proud of my four stepchildren, to whom I have been the full-time mother for about nine years. Ms. Brezina, do you begrudge those four children the benefit of a consistent mother? Should I have refused to marry their father—who had a vasectomy even before we met—because it would make me the mother of five children and subject to snide comments about “overpopulation?”

Know what else I am proud of? I am proud of my two youngest children; two beautiful little girls with special needs that we are adopting through the Department of Social and Health Services (DSHS).

Come to think of it, a certain level of population control could arise from the abolition of DSHS. With DSHS no longer in the picture, children would remain in homes where they were subjected to abuse and neglect, and we’d see a rise in child death rates as a result. Is this what you were getting at, Ms. Brezina? Should I stop adopting children who have been removed from dangerous homes? Am I failing to do my part for population control because I provide a safe, loving home for children who don’t have one?

I suppose you’re right, though, Judy. God actually didn’t give me the brains to control myself. When a child needs a mother, I just can’t seem to say, “No.”

Frankly, I think striving to give children a better life IS a pretty hot commodity.

Blurted by Christina-Marie Wright at 11:44 AM