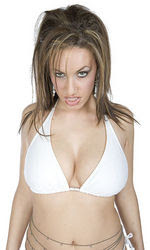 So… they’re closing Gitmo. Rumor has it United States government agencies have been engaging in some pretty inhumane tactics at Guantanamo Bay Detention Facility in the hope of extracting information from detainees about alleged terrorist activities. Why does a leading world power like the United States waste resources on questionable physical and psychological tactics, which may or may not elicit confessions from detainees?

Wouldn’t it be cheaper and more effective to force prisoners to try on a never-ending collection of bathing suits that just don’t fit right?

Hmmm? What’s that? You say The Gonzo Mama’s finally showing the strain of mothering seven kids? You say she’s finally severed the last tiny thread of sanity she’s been clinging to?

Take my word for it. Choosing to try on bathing suits is the single most masochistic act a woman can engage in. In fact, the psychological torture is so great, we don’t even bring it up when conversations turn to the topic of human rights. It’s simply too shocking for those who have not experienced it themselves.

oom mirrors as you try on, in exhaustive procession, every style of bathing suit offered in every department store in the known universe. Not terrifying enough? Imagine that all the designers of the world conspired each year to make you look fifteen pounds heavier than your actual weight by using the most unflattering cuts possible. Still not scared? Add another five pounds to your image, courtesy of “ulgy-fying” fluorescent lights in the dressing rooms.

Times are tough, though. Our economy is faltering, and our national deficit is unfathomable. I’m willing to break the code of silence for the greater good. Let’s talk about what is allegedly happening at Gitmo, and let’s talk about how we can accomplish the same thing with Lycra® or Spandex® swim attire.
If my program is successful (and it will be), it could be expanded to simplify interrogation processes for kidnappers, AIG officials… Martha Stewart.

Sleep deprivation. I’ve lost many a night’s sleep worrying and dreading an upcoming shopping excursion for the purpose of finding a bathing suit. Just knowing that I will be trying on suit after suit and succeeding only in accentuating my cellulite and stretch marks is more than enough to cause insomnia. Why make it someone’s job to keep a prisoner awake all night? Why not just hang a dozen bikinis over the door, with an attached note reading, “Tomorrow morning you’ll be giving a fashion show!” The payroll savings alone would be staggering.

Isolation. Prisoners at Gitmo are not allowed to have contact with friends and family. I suspect they are also not allowed to attend pool parties or beach barbecues. Ha! I guarantee, if those same prisoners were wearing an unflattering “tankini,” they’d be happy to stay indoors and answer a few questions.

Food deprivation. Seriously, this is a no-brainer. Most women willingly self-starve prior to bathing suit season. Enough said. Next topic.

Look, I’m not saying that things don’t need to change at Gitmo. I’m just asking if closing it down is really necessary. I mean, Guantanamo Bay sounds really pretty. In fact, I’ve heard it’s a great place for waterboarding. 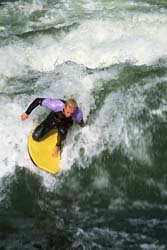 Blurted by Christina-Marie Wright at 1:10 PM