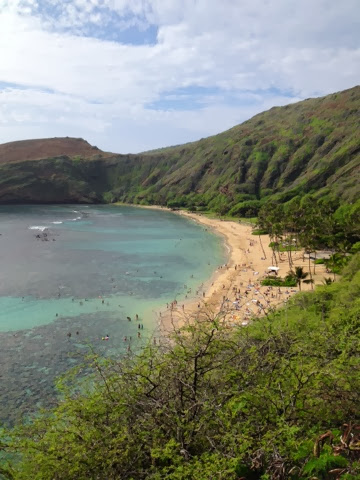 Yesterday, the Gonzo clan packed a picnic, slapped on some sunscreen, and went to Hanauma Bay for some snorkeling.
Should you be inclined to do so, here are some things to know:
Parking is $1.00 per car.
Admission to the beach is limited each day, so arrive early.
The price of admission is $7.50 per person, with kids 12 and under free.
Snorkeling gear is available for rental, if you don't have your own.
Don't skimp on the sunscreen, and consider wearing a t-shirt to reduce chances of getting sunburned on your back while snorkeling around. There's not much shade to be found on the beach.
You will see amazing, colorful fish and sea life swimming along the coral reef. If you're lucky, you'll meet a sea turtle. However, don't touch, chase, or otherwise harass the sea life. A great conservation effort is underway to protect the beautiful ecosystem found in the bay.
Sometimes, tiny jellyfish come in with the tide. But... I'll get back to that in a moment.
I'm not a snorkel fan, by nature. I grew up swimming in Lake Chelan, and I'm a strong swimmer, but I never had much need for a snorkel. If you've seen one squawfish, after all, you've seen them all.
The very act of putting a mask on my face is enough to trigger my claustrophobia, but I was determined to snorkel with Mr. Wright, who had been looking forward to the outing for months.
So, I took a deep breath, slapped on my mask, shoved the snorkel in my mouth, and set off. It was like swimming in an aquarium, with the fish up close and personal.
As I began to get the hang of breathing with the snorkel, Mr. Wright led me over the top of the reef to venture out farther. The deeper water revealed even more types of sea life, and I was really hitting my groove, until...
Ouch. OUCH! What was that?!
It burned. It stung. It was painful, and it was inside my swimsuit. I ripped my mask off, spit out my snorkel, and motioned to Mr. Wright to surface.
"I'm getting eaten!" I yelled.
"Are you okay?" he asked.
"No! Something is getting me!"
It may have taken us fifteen minutes or so to get past the reef, but the return trip took about ten seconds. I raced out of the water to the outdoor shower, but I was still on fire.
The information booth told me some micro-jellyfish had been reported in the surf that day, and sent me to the lifeguard station.
The lifeguard checked my breathing, and sent me back to the shower to scrub my skin because, he said, "the stingers are still in your skin."
Awesome.
I had Mr. Wright hold up a sarong to shield me as I stripped down and scrubbed my red, welted skin, then popped an antihistamine and passed out on the beach.
The day wasn't a total loss, though -- I saw some really beautiful sea life, spent one-on-one time with my husband, and made friends with this rooster, who shared a sandwich with me: 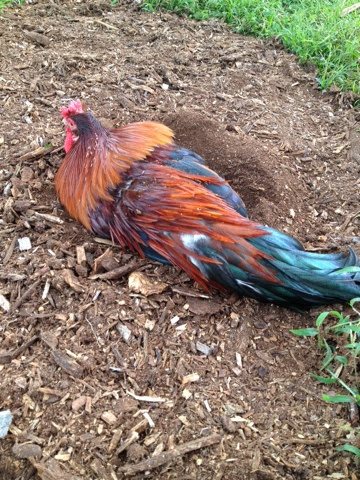 Bottom-line advice... If given the opportunity to explore Hanauma Bay, do it. Take your family, invest in an underwater camera, and go. But, stay on the shore side of the reef, and ask about any jellyfish conventions.
Blurted by Christina-Marie Wright at 10:45 AM