Boogie Boarding and the Booger Monster 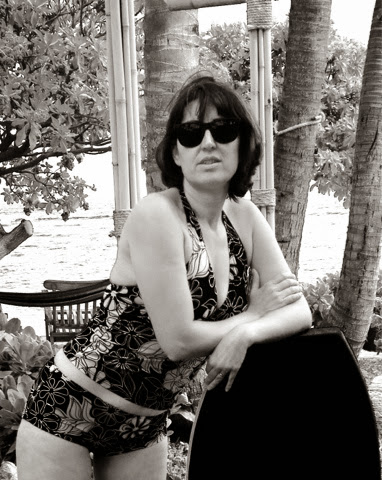 My first boogie boarding lesson didn't go well.
To be fair, I don't have a lot of experience communing with the surf. When I was little, I lived on the Oregon coast, and kicked around in tide pools, and I did a bit of sea kayaking in a calm bay in Sanibel Harbor with Mr. Wright once, but outside of wading into the ocean in the Bahamas, I'm an ocean noob.
Mr. Wright has filled my ear with stories of summers he spent surfing in Hawaii, but -- and I quote -- "(He is) too old and fat to pull (his) body up on a shortboard," so he decided boogie boarding would be the best recreational choice for this trip.
I've been fighting a chest and sinus cold for a few weeks, and although I'm mostly better, I keep coughing up mucus. Sexy... I know.
As we started paddling out from the shore, I dutifully nodded at the instructions my husband gave. Did I mention I've lost my voice, in addition to boogieing with the Booger Monster? So nodding was the best I could do.
(As an aside, it is Mr. Wright's greatest thrill, seeing his wife in a bikini, and unable to speak.)
"We need to paddle out, so we can catch the waves where they're bigger, before they break," he said.
So, we paddled. And paddled some more. And kept paddling. I took a look behind me, and the beach seemed very, very far away.
A big wave was approaching, and I thought, Okay, this is it. Finally, we can turn around, catch this big wave, and ride in to the shore. But... No.
"Okay," said Mr. Wright, "when the wave breaks, you need to push the front of your board down, and dive under the crest, so it doesn't flip you over."
I nodded, but didn't quite have time to process the instruction before I found myself rolled by the tsunami. Damn!
I also got a nose full of salt water -- sort of an impromptu netti pot, actually. Oh, and also a big swallow of ocean, which reminded me of my mother's advice to gargle with salt water any time I was sick as a kid... Which always made me feel like puking, by the way.
After paddling out some more, Mr. Wright began cursing the dying winds, and the lack of "gnarly waves," and instructed me to turn around so I could get ready for the "okay" wave coming.
By that time, I had snot running down my face (I guess the saline cleared my sinuses?), and I was hacking up loogies the size of coconuts. I turned around, started paddling and kicking... Too late. The wave sucked me back, and I totally missed it.
I spent the next 36 hours (give or take) paddling and kicking myself back to the shore -- by which time, my arms, abs and legs had turned to the exact same tissue from which sea slugs are made.
As I emerged, coughing (coconut-sized loogies coming up), sputtering and wiping the snot from my face, I glanced and my sister-in-law, who was calmly reading her Kindle.
"THAT," I wheezed, " SUCKED."
"Hey, you're getting your voice back!" she noted. "Did you gargle with salt water?"
If I wasn't so tired, I would have flipped her hammock.
Blurted by Christina-Marie Wright at 12:26 AM