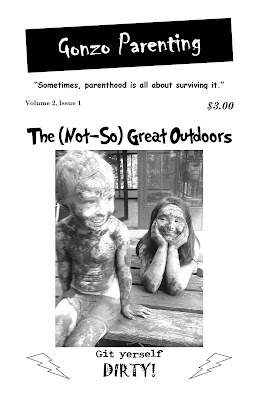 The new issue includes some awesome writing and photography! We've got:
PLUS:
It's three bucks. $3.00. Triple smackers. Less than a venti mocha at Starbucks. Go for it.

Orders, trades and contributor's copies will ship around the end of next week.
Here's a sampling of the contents, to whet yer whistle - or whatever you need whetted... I'm not judging.
The Beginning – and End – of My Fishing Career
by Christina-Marie Wright
My parents are nutty about camping. Seriously, I don’t know how I ended up with such distaste for sleeping, cooking, eating and bathing in the out-of-doors, considering my parents are such fanatics. Here’s just a sampling of phrases you’ll never hear come out of my mouth:
Bring on the mosquitoes!
Mmmm… hot dog on a stick!
A thin layer of nylon is all I need between me and the elements – and the bears!
Unfortunately, my parents were as adamant about exposing their offspring to the wilderness as I am about staying out of it. Clearly, there was a major conflict of interest and opinion in regard to how my childhood vacations should be spent.
That difference of opinion is how I ended up stuffed into a tent in an eastern campground while it rained for something just shy of the fabled forty days and nights. I think I was about nine years old at the time, though I could swear I was six when we began the trip. When the rain stopped falling, Dad asked if I wanted to go fishing with him. “Heck, yes!” I shouted. At that point, I would have followed him into a sewage treatment facility, if it meant getting out of that tent.
Dad grabbed the poles and led my brother and me approximately eleventy million soggy miles away (on foot) to “this fishin’ hole I know about.” It turned out to be a secluded waterfall, with a wide pool at the foot. My brother and I half-heartedly cast into the pool, while Dad headed closer to the waterfall, expertly landing a cast at the base.
A near-eternity passed, with none of us getting so much as a bite. I didn’t mind much – it was better than being cooped up in a tent the size of my closet. The sun warmed my shoulders and danced on the water, sending blazing starbursts of light in every direction. The waterfall crashed into the pool, its song echoing off the rock walls that enclosed the pool.
Ah, sweet serenity.
“Hey… Hey! I got a bite!” The peaceful scene was shattered by Dad’s yell. He was pulling hard on his fishing pole, reeling and straining for all he was worth. Below the falls, the tail of a massive salmon breached the surface of the pool, fighting and twisting in an effort to escape.
It was a battle of endurance, and I wasn’t laying money on either one as the clear favorite – man and fish appeared fairly evenly matched. Dad struggled for several more suspenseful minutes, then landed the monstrosity.
Well… almost.
“Sonofabeaver! He spit the hook!”
(Leave it to Dad to teach his progeny the ever-important vocabulary of fishing. I believe that particular phrase is actually mandated by federal law – and enforced by game wardens – anytime a nice catch spits the hook.)
“No, Dad—LOOK!” My brother pointed to a cluster of rocks a mere yard from Dad’s feet. The fish’s thought stream must have read something like this:
Puh-toooie! Yeah! I’m off the hook! I’m flying… flying… Look out, water! Heeeere I COME! Yeah, baby! Oh, crap… SONOFABEAVER! I’m gonna fall, headfirst, into those rocks!
The fish landed, head wedged between two large stones. For a moment we all stared, dumbfounded, at the furiously wriggling salmon, which was determined to squirm its way back to the pool.
“EEEEEEEIIIIIIYAAAAAAAAAAH!” Dad’s battle cry could have splintered wood. He launched from the ground—head lifted, arms and legs spread, leaping toward the fish. (For a moment, he resembled a five-pointed star, flying through the air, surrounded by golden glimmering starbursts darting off the water’s surface.) With both hands, he reached for the fish tail as his feet hit the ground. With puma-like instincts, Dad bent down to get more leverage and…
RIIIIIIP! Dad’s jeans split from zipper to back belt buckle, but he didn’t let the phenomena of his underwear suddenly becoming outerwear deter him. He yanked the fish from the rocks and hefted it backward, over his shoulder. The salmon smacked the rock wall. I expected it to be stunned or killed, but the battle only seemed to make it stronger.
For a nanosecond, I wondered exactly how far we were from the nuclear facility, and if the government knew about the radioactive, mutant-powered salmon running amok in the area.
Dad, too, seemed to draw strength from the war, and he spun around, pouncing on top of the flailing fish. He pinned his opponent for a full three counts, proving once and for all who the champ was.
Talk about poor sportsmanship... Instead of graciously accepting his belt and title, Dad drew his hunting knife and began thwacking the fish’s head with the heavy handle end. Over and over—thwack thwack, thwack… thwack… until there was no more fight in the fish.
Then, all was silent. Well… almost. One angry, horrified little girl sobbed and hiccupped and cried out through the quivering fingers held over her mouth, “Dad? How COULD you? How could you DO that? How could you beat that POOR FISH like that?”
The girl turned and ran in the direction of camp, followed by a small giggling boy and a bewildered man who muttered, “Are you kidding me?” as his boxer shorts flapped in the breeze behind him.
* * *
Upcoming issues will take on "Working Parents," "Pets & Animals," and "Adoption." Be as literal or figurative as you like.
We'll also be doing another "Text-osterone" issue soon, so get to work, daddies!
Be sure to check out the submission guidelines before sending me your genius. Thanks.
Blurted by Christina-Marie Wright at 7:11 PM