I Wore Flowers in My Hair; They Made Me Sneeze 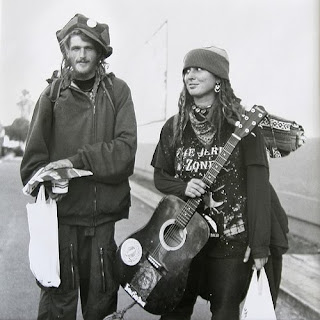 Growing up, I always suspected I was born about thirty years too late. I imagined I would have been a wonderful flower child; barefoot, braless and sticking daisies in the barrels of rifles.

Now that I’m grown up, I hate going without shoes, and my post-nursing breasts demand a brassiere. As if that weren’t enough to disqualify me from the free love generation, I’m allergic to daisies.

I set aside my shortcomings –and endeavored to rediscover the flower child roots I was cheated out of due to my delayed birth date– during our trip to San Francisco in 2007. It was the 50th anniversary of the first reading of Allen Ginsberg’s “Howl,” the entire city was cloaked in a heavy cloth of anticipation, and I intended to follow Ginsberg’s advice— “Follow your inner moonlight; don’t hide the madness.”

Madness, as it happens, would be found nightly at Harry Denton’s Starlight Room, but that’s a story for… another story.

Even before unpacking, I hopped a trolley and set out for the infamous intersection of Haight and Ashbury. I pictured natural foods co-ops, markets filled with handcrafted wares, and street musicians playing just for the sake of art. Exuberant and expectant, I watched the passing street signs, preparing to disembark the trolley and embark on my flower child communion.

Whatever may have been at the intersection of Haight and Ashbury during the Summer of Love, I suspect it wasn’t what I found in 2007: a Starbucks and a Gap.

“WHAT?” I cried. “Where are the flower children?” Peering in the window of Starbucks, I suspected the aged free love brokers were sitting inside, dressed in khakis and pressed button-down shirts from the Gap across the street.

Disappointed but determined, I pressed on. I planned only one purchase in San Francisco – apart from a commemorative copy of “Howl and Other Poems,” of course. I figured San Francisco must be the best place in the world to find a peasant skirt –one of those flowing, lightweight skirts that look great with Birkenstocks.

I walked the entire length of the Haight, popping into every boutique, looking for my souvenir. Hours later, with blisters on my heels, falafel in my stomach and frustration upon my brow, I called Mr. Wright from my cell.

“How can the peasants afford them when they’re over $150?” I asked.

I wasn’t going to let a failed shopping expedition ruin my trip. Oh, no. I returned to the hotel, braided some silk daisies into my hair, and dragged Mr. Wright to City Lights bookstore, the epicenter of the Ginsberg celebration. We entered, and I began collecting stacks of free poetry journals and zines.

Mr. Wright stood in the middle of the bookshelves, afraid to touch anything. “Don’t sign up for anything,” he said. “Don’t give our names or address. I’m pretty sure we’re going to end up on some Communist watch list just for setting foot in here.”

I laughed and perused the shelves of anarchist poetry while Mr. Wright sprouted a healthy crop of hives.

The sound of applause filtered down the stairway, and I realized there was a reading taking place. Tugging on Mr. Wright’s sweat-drenched hand, I climbed the stairs and entered the small room at the top. There, a tattoo-covered, multi-pierced person was reading an essay about pigeons.

To this day, Mr. Wright and I have an unresolved bet regarding the gender of the reader.

“Pigeons are rock doves,” they said. “Doves are symbols of peace. Why do people hate pigeons so much? I mean, if we started calling them ‘rock doves,’ maybe people would give them the respect they’re due.”

Gasping, I leaned over and whispered into Mr. Wright’s ear, “I’ve finally found my people!”

The look he gave me in return suggested he would have much preferred to see a copy of my family tree BEFORE the wedding.

Blurted by Christina-Marie Wright at 9:24 AM