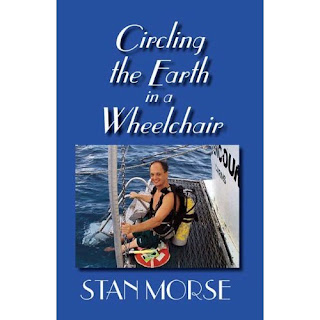 You may recognize today's reviewer from our adoption photo. Stan is not only a good friend and wonderful author, but he was also our adoption attorney! Stan's book, Circling the Earth in a Wheelchair, has a place of prominence on my bookshelf and in my heart. You can order your copy directly from Stan by contacting him on his website.

Here's what he had to say about Everything I Need to Know About Motherhood I Learned from Animal House:

I met a teen-aged Christina-Marie years ago, a dark beauty twirling like a ballerina on the sidewalks of our small town. People in Chelan DO NOT TWIRL ON SIDEWALKS. They behave respectfully. They attend church. They park their cars properly, between the white lines, all the way up to the curb, thank you very much.

Entranced, I managed to introduce myself, beginning a friendship that has matured into a personal need to have conversations that transcend the “social, cultural, intellectual wasteland.”

Of course, there was that twirling thing. I worried at first that she was destined for some distant, quiet psychiatric ward. And I was never more concerned about her sanity than when she announced several years ago that she intended to become a writer. A GOOD writer, mind you! My own sanity has been repeatedly tested through the process of writing a travel book (published), three unpublished novels, two unsold screen plays, numerous magazine articles for which I was paid nearly enough to buy a good deli sandwich . . . well, you get the picture. And here was this . . . twirler . . . who was going to spin herself into a literary tizzy with no room for escape.

But my dear friend has actually succeeded, and formed herself up into a considerable wordsmith. I mean that. Because anyone who can write tellingly and honestly about herself and her family, and leave you laughing, deserves the Pulitzer.

In Christina-Marie’s prose there is no sugar coating, no fine veneer, no lying. She dissects the world of parenting with the impatience of a Mark Twain, a George Carlin, a Lilly Tomlin. No “cute” urban legends here. Just hilarious facts about what we all suffer through. And from this collection emerges one telling truth: Life may not be for sissies, but with the right attitude, it never ceases to entertain!

Blurted by Christina-Marie Wright at 12:41 PM