Is This an Intervention? 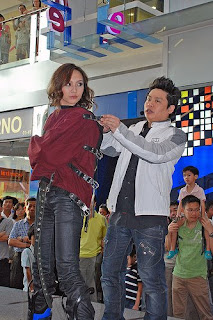 I had twenty-five days in which to apply for a forty-five day special occasion permit from the Washington State Liquor Control Board. No problem.

Two days before the Motherhood: From Egg to Zine (and everything in between) event, I didn't have a bartender. The morning of the event, I still didn't know if one of my acts was even going to show up. No... problem.

Twenty minutes before the show, my sound guy hadn't shown up yet, the fencing materials for the wine garden had gone mysteriously missing, one of the acts asked to combine her two performances, and gusting 98-degree winds threatened to cancel my sword dancer's act, since the looming hurricane would seriously impede her ability to balance a sword on her head. No... prob... lem?

We started exactly thirteen minutes late, but things rolled right along. Our first act, a trio of divalicious singers, wowed the crowd with their show tune extravaganza. Then, it was time to read my first piece, "The Curse of the Mothers." My mother, sadly, was unable to make the show but, I suggested, maybe it was for the best, since I didn't know how she'd feel about me sharing the family secret.

"I'M GONNA TELL HER!" came the heckler's cry. Thanks, Dad.

We had some singing. We had some reader's theater. We had Mommy-Muse Christy belly dancing. We had Mr. Wright reading "Frederick's of Halloween," from Gonzo Parenting's Text-osterone issue. We had roller dancing. I read "Good Fences Make Good Voyeurs."

At some point, Riot Mama told me that her second piece was missing from her printouts. "No problem," I said. It had become my mantra. "You can read the piece I printed in the last issue of Gonzo Parenting." I handed her a copy of the zine.

I assume her first reading went well, but I can't be sure, since I was stripping in the public bathroom at the top of the hill, furiously tugging my belly dance costume over my sweat-soaked body. "I hope I wrote enough extra plugging and stalling into the emcee script," I whispered to my instructor/dance partner as we tied on our coin scarves and ran down the hill to the amphitheater, winded but ready to dance. For once, I didn't miss a single step or turn, but the heat was beginning to make me dizzy and the migraine that had started the day before was steadily increasing.

We had a reading by the other Mommy-Muse co-founder, Linda. Her mic died halfway through and had to be switched out. No problem. We had more reader's theater.

By this time, my head was really beginning to give me trouble. Some horrible, invisible, sadistic creature was tightening a tourniquet around my skull, and it didn't feel nice. Not one bit.

The sun was setting and it was finally cooling off. I pressed my head into the cool grass and watched the sword dancer miraculously keep the weapon balanced on her head...

As the emcee announced my third piece, I reluctantly pulled myself to my feet... and felt the vomit coming. I know this migraine symptom well; my least favorite of the "migraine attack" phase. I frantically began waving my hands at the emcee, wordlessly begging him to stall, and ran behind the boathouse to puke my innards up. N-uh-uh-uh-o p-p-p-pro-uh-uh-bleeeeghm!

Wiping my mouth, I took the stage and, somehow, shakily, read "Forget Gitmo." I was seriously beginning to wonder if I was going to make it through the rest of the show. My insides were churning, my head was preparing to implode, and I just wanted to go home, thank you very much.

More reading, more reading... My last piece, "I Hope Jesus has a Sense of Humor," was read so quickly and manically, I'm sure no one caught a word - which, considering the subject matter, might have been a good thing.

Mr. Wright finished with an awesome drum solo, Christy did closing comments, and it was finally, blessedly over! I sank back into the grass, closing my eyes. We'd pulled it off! People came! They enjoyed themselves! No one got booed off the stage! I didn't pass out!

My mental celebration was interrupted by a woman's voice. I cracked an eye open. There she was, standing over me, looking earnestly at me. I sat up.

"Hi," she said. "Great show! Listen, I coordinate resources for women in crisis. I wanted you to have my card..."

Blurted by Christina-Marie Wright at 11:57 PM