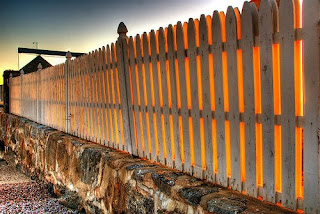 Seriously, I’m not a snoop. That would be rude. However, circumstances frequently make it difficult not to know what’s going on with the neighbors.

We live in a community that is, largely, filled with “second homes.” The owners of eighty percent of the houses in my neighborhood live three hours away, appear after 8:00 p.m. on Friday nights and leave before we get home from church on Sundays. Many bring friends and extended family with them, hang out on their respective decks until the wee hours of the morning, and consume barrels of liquor in a single evening.

They are, after all, on vacation.

The people who own the house next door bring their dogs. Their precious fur balls and our canines growl and bark at each other through the six-foot fencing, making us the least popular folks on the block. “You’re the people with… the dogs,” many groan, upon meeting us at neighborhood gatherings.

I’ve never actually talked to the members of the two families who jointly own the home next door. We’ve exchanged half-waves and grunts of acknowledgement on our way out to our driveways, but that’s about it.

Still, we know them.

My family and I were sitting on the deck, enjoying the evening, when Mr. Wright commented on the twangy country music blaring over the fence. The tune-playing neighbors were nowhere to be seen when I peeked over the edge of the deck. “I don’t get it,” complained my husband. “They play great classic rock all day on their outdoor stereo, then put on country and leave. We get to listen to this until they come home?”

“That guy was here earlier,” Pepper offered. “I wonder where he went.”

Pepper shook her head. “No. The other guy.”

“The guy that’s married to lady who’s always reading on the patio?” I offered.

“She’s married to the loud guy. The other guy is married to the lady that’s always yelling at the dogs.” Pepper spends more time cataloging the activities and relationships next door than the rest of us. I, for one, believe her interest isn’t so much for the sake of being neighborly as it is to ascertain whether or not a certain dark-haired teenaged boy is home and, if so, if he’s in the back yard with his shirt off.

Pepper’s almost thirteen. Is there is a federal law that mandates that all nearly-thirteen year-old girls must develop a crush on a seventeen year-old neighbor boy who doesn’t know she exists? Does that law further require that the girl must, at the first glimpse of the boy exiting his home, run screaming into her house, to ensure that she never speaks to or makes eye contact with the boy?

I’m pretty sure the law was in place when I was almost thirteen. It’s comforting to know that some legislation still serves a purpose, after all this time.

The family across the street sometimes brings a friend who plays guitar and sings after dark on their deck. He prefers a folk-rock fusion and has a pretty decent voice. I’ve never actually seen him, of course, but I’ve spent many an evening, sitting on the cement in my driveway, listening to his easy strumming and edgy voice. Call me a fan.

Once or twice a year, our neighborhood has a celebration of some sort that invites everyone to gather at the clubhouse or in the park for food and a meet-and-greet. We attended the New Year’s Eve party a couple of years ago, and realized we didn’t actually know any of our neighbors.

An enthusiastic blonde introduced herself to me. “Hi! I’m Barbie! We live in Redmond!”

I glanced around, vainly trying to figure out who the other half of “we” was, before saying, “I’m Christina-Marie. That’s my husband, over there.” I pointed.

Barbie gave a less-enthusiastic, “Oh. Where do you live?”

“We live here. We have seven kids.”

“Here? Like, all year long?” Barbie’s enthusiasm was nonexistent at that point. I nodded. Suddenly, recognition crept into her eyes.