Divine Secrets of the Ma-Ma Sisterhood 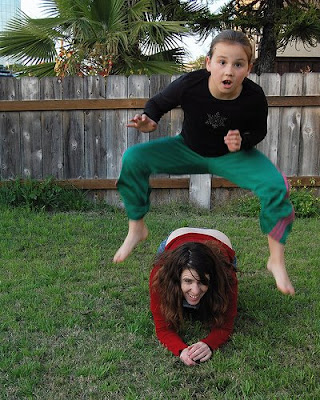 Motherhood does something strange to the female psyche. Somehow, the journey into the empowering and bewildering mother world produces a physiological need to share stories.

Even before giving birth to my son, I saw the warning signs. I watched mothers speak of their children’s day-to-day activities as if their progeny were the first to ever crawl, kick a ball, utter monosyllabic nonsense or “make a stinky.” Ridiculous!

“I, for one, will never carry on that way,” I vowed. Naturally, I had to eat those words mere hours after Pockets was born. I can’t explain it. There is a biological need to share stories of birth, child-rearing and mothering with other mothers.

Perhaps it’s a type of congenital disease that courses through every human female, waiting for the commencement of motherhood to flare up. Like me, most don’t even know they are carriers until they find themselves discussing a single messy diaper at length with complete strangers.

The phenomenon is not limited to biological mothers. Adoptive moms, too, experience the compulsion to share their stories about every aspect of their parenting journeys. Given the opportunity, we will share every intricate detail about how long our adoptions took, the necessary but frustrating navigations of “the system,” what our fears are about raising children whose medical histories we may not know, and what led us to chose adoption. When we’re done, we’ll tell you about our child’s first tooth, first day of school, and how amazing our child is.

Whether bragging about our kids or commiserating about the trials of parenting, mommies needn’t look further than the busy mom next door or the woman bouncing a toddler on her hip at the bus stop. I’ve struck up conversations about potty training, naps, teething, schooling and teenagers with women on the subway in Washington, D.C., on airplanes and in public restrooms.

Of course, it is widely known that I have no shame.

Nonetheless, I find mothers are largely receptive to unsolicited conversations about parenting. I’ve only been threatened with one restraining order in my 15 years of verbally violating strangers’ personal spaces.

Believe it or not, motherhood can be lonely. Some mothers feel they are unique in their fears or struggles or worry that they “aren’t doing it right.” The compulsion to connect with other moms and share our stories is an important one, and it shouldn’t be ignored. Sharing exposes us to different points of view on the very issues we are dealing with and reminds us that we aren’t so alone – other moms have lived through difficult situations, worried about their children and made mistakes in parenting.

Just last week, I felt like a candidate for Worst Mother Ever when I hit the drive-thru at Taco Bell to buy cheese roll-ups for my two toddlers before dropping them off at daycare at 9:30 a.m. I called it “brunch.”

I was feeling guilty and said as much on my Facebook and Twitter updates. I received a flood of messages from other moms in response, assuring me that I hadn’t even made the playoffs for the title of Worst Mother Ever and sharing their own less-than-glamorous parenting moments. One mom told me that she’s often running late in the morning and takes her son through Jack in the Box for deep-fried chicken strips, then parks down the street from the school until he finishes them, so other parents don’t see what he’s eating for “breakfast.” Another admitted that she fed her daughter and the daughter’s friend cake with extra frosting when she realized there was nothing suitable for lunch in the pantry. “Think the other mom will mind?” she asked.

Don’t be shy, my mama-sisters! When you see a mom struggling to keep her brood in line at the grocery store, regale her with your story about how your baby cried nonstop on a six-hour flight. She’ll appreciate it.

Welcome to the sisterhood!

Blurted by Christina-Marie Wright at 11:12 AM