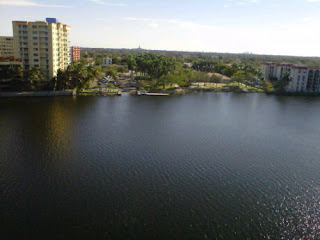 I'll admit, it was a bit unsettling getting to the airport with enough time to walk to the gate, instead of sprint. I was equally surprised when our checked luggage actually made it to the same airport we did. Those things just don't happen to the Gonzos. We're always rushing this way and that, making frantic phone calls after lost luggage, having difficulty with botched reservations at the hotel and so on, but none of those familiar, soothing scenarios presented themselves. I felt a tiny bit better when our seatmate on the plane filled us in on the latest news about cruise ships - namely, the recent capsizing of the ship in Italy and the widespread outbreaks of Norovirus among ships departing from Florida.

When you live like The Gonzo Mama, crisis and chaos are more comfortable than safe and laid back.

"Maybe, just maybe," I thought, "this trip will be a real break for Mr. Wright and me... No kids, sunshine in February, walking hand-in-hand along the beaches of Miami, and finishing with a cruise through Key West and the Bahamas."

We checked into the hotel with no glitches and headed to the welcome reception, where Mr. Wright effectively ate dinner while I sipped a mango mojito, in the absence of any vegan-friendly fare. We had big plans to take on the Miami nightlife, but I fell dead asleep as soon as we got to the room.

The next morning, it started raining. The winds picked up, giving a certain monsoon-like feel to our walk along South Beach, and adding a bit of flair to our outdoor dining experience. I ate a salad, by the way, and passed up the opportunity to enjoy a 36-ounce tropical drink served in a fish bowl in favor of a soy latte.

We headed back to the hotel, soaking wet but prepared to enjoy some private, grown-up time. We drew the curtains to prevent any guests at the neighboring hotel from benefiting from a room with dual views, set the deadbolt on the door, and looked into one another's eyes for the first time in a few years. Just as we barely reached our target aerobic heart rate, one of the kids called, which simply confirmed my suspicion that they intuitively know when it's most inconvenient to interrupt their parents, and they use that skill with deadly accuracy every single time the opportunity is presented.

I'm not asking for a hurricane or anything, but a little adventure would be nice. Where are Crockett and Tubbs?


Blurted by Christina-Marie Wright at 9:17 AM