You Know You're a Great Role Model When... 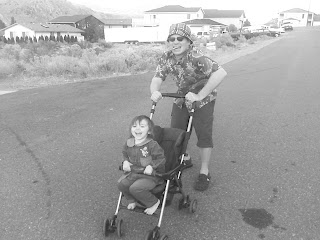 I've been trying to get across to the members of my family that Curlytop and Snugglebug are like over-sized camcorders these days. Anything we say or do is likely to be played back for us by one of our little cinematographers - most likely at the most humiliating or improper moment.

So far, this has included choice phrases uttered by adults and teens in the household (not terribly appropriate for either set, and definitely inappropriate coming out of the mouth of a kindergarten student). Sometimes, it includes an interesting pose or gesture.

Sometimes, it includes both.

Pepper and I stared at Snuggle in disbelief, then looked at each other. "Did she just do what I think she did?" Pepper asked. I nodded. "Where did she learn THAT?" Pepper wondered aloud as I explained to Snugglebug we don't do that and it's not okay and her sister's bottom is her sister's bottom, and we don't touch it.

I knew the answer, of course, but Pepper confirmed it when her father came home, entered the kitchen, kissed my cheek and copped a squeeze. "Ooooh... that's NICE!" he announced to everyone within earshot and a decent line of vision.

Then, he scooped up the four-year old attached to my leg.

Where did she learn that, indeed?

Blurted by Christina-Marie Wright at 11:54 AM