Bad Gratitude Monday: Someone Stole My Car, and All I Got Was This Lousy Blog Post

It was an eventful weekend, readers.

Friday night, the Gonzos were supposed to have dinner at my parents' house. It was a Big Deal, because we were going to meet my older sister for the first time, ever. In spite of this event being a Big Deal, we were running late, as usual.

At 5:42, I texted Mom, asking her what time dinner was, even though she'd already told me fifty times, and I'd forgotten as many times, like it wasn't actually a Big Deal at all, but maybe just a casual get-together that let people drop by whenever they gosh darned well felt like it.

Dinner, Mom texted back, was at 6:00. Mom lives 45 minutes away. We were still at home. All of us, that is, except Mr. Wright, who was taking advantage of the free wi-fi at the store on the hill to finish up some work.

My mother has superpowers. In fact, she is the only person I know who can actually audibly express her disapproval and disappointment via a cheery text message: That's ok! We'll just wait 4 u! the text said.

But that wasn't what she meant.

Nope. I know Mom well enough to actually hear, This is a Big Deal, and u r late. Get ur ass over here, pronto, young lady.

I, in turn, texted Mr. Wright: U need 2 come home now. He knows me (and my mom) well enough to hear: Mom's on my case about us being late. This is a Big Deal, u know! he returned: Pick me up on the way.

I pulled into the parking lot of the little store on the hill, urging Mr. Wright to get into the car, NOW, and peeled out, headed for Mom's. Dinner really was a wonderful Big Deal. My big sister is amazingly cool, and there's a whole big long story about why we haven't met until now, but I'll save it for another time. We stayed too long and drove back home too late.

So late, in fact, that we didn't remember to pick our car up at the little store on the hill.

It's not a nice car, readers. In fact, it looks like this: 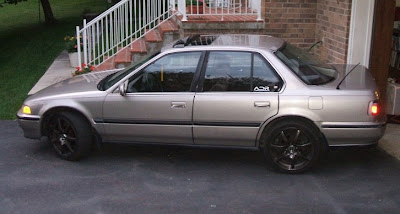 But even crappier. And filled with the junk that mommies of seven kids fill their cars up with. So, why would anyone want to steal it, right?

Anyway, we called it in, updated our Facebook statuses (because that's what you do when stuff happens, right?), and realized we were gonna have to spend a whole lot of gas money to get me to my book signing in Woodinville Saturday in our petro-guzzling Expedition.

But then, (gratitude alert!) our neighbors, who saw our whining Facebook statuses, offered up their much more fuel-efficient car for me to get to my book signing. How cool is that? Seriously, I've got the best neighbors! (I actually baked dinner rolls last night and took some over while they were still warm, to say thank you, but my health-conscious neighbor has rules about carbs, so he only took one, and Mr. Wright ate the rest while we visited on the porch.)

I called Second Cup of Coffee, because that's what we locals do when we lose something, right? We call Second Cup and ask people to find it. I asked people to be on the lookout for a crappy Honda with a WSU sticker in the back. You'd be amazed how many cars around here match that description, but none of them happened to be mine.

So, we set off for my book signing at Edmonds Winery, grateful for the loaner but bummin' about our Honda. On the way, Mr. Wright asked me to put in a CD, and I selected Tree63, because I wanted to hear this song, to remind me that we should praise the Lord, even when things suck:

Mr. Wright put the song on repeat, and it became our anthem for the day. I was going to praise the Lord, no matter what. I began praying that the Lord would move on the hearts of the bandits who took our car, and that He would give me a spirit of gratitude for the things He has given me, and a spirit of forgiveness, so I could just let Him deal with the thugs.

My book signing was awesome, and I met some wonderful people, sold a few books, reunited with a couple of my favorite author mamas (Corbin Lewars and Monica LeMoine), and stopped off to visit an old friend in Seattle, who blessed us with some of his awesome jam, jalapeño relish and plum chile sauce. It was a good day, even though my car was stolen.

We got home at around 10:30pm, dropped the car off to the neighbors, and jumped into our Expedition to head into town to meet up with some gals Mr. Wright hadn't seen since high school. We were about two miles from town when we ran out of gas.

Yup. It was that kind of day.

Mr. Wright was near tears. He said, "Lord, could I just have a little bit of mercy? Just a little bit?" Then, he grabbed the gas can, said, "I'm walking to the gas station. Then, I'm most likely gonna get drunk. You can come with, if you want."

Hmmm... Walk two miles to town in stilettos, or sit on a dark highway in a car that won't start?

I got out of the car and locked it up, following Mr. Wright up the road. We weren't 50 feet from the rig before a bright yellow Camaro, pimped out with a big spoiler and lots of chrome, pulled over. The driver opened the door and said, "You guys need a ride?"

I didn't even care if he was a psycho killer. I just knew I wasn't going to walk two miles and back in stilettos.

He took us to the nearest gas station, where Mr. Wright filled the gas can. As we were getting into the Camaro, a Chelan County deputy pulled into the parking lot. I resisted the urge to lean out the window and yell, "Hey, Buddy! Go find my stolen car!" Our rescuer pulled out into traffic, heading back toward our rig and its empty gas tank. As we drove away, I coulda sworn I saw our car drive by the gas station, but I didn't want to be the crazy lady, imploring the stranger who picked us up to "flip a bitch" in the middle of the road and chase down a car that probably just looked like ours but wasn't, in fact.

So, I said nothing.

We put the gallon of gas in the car, and drove back to the same gas station to fill up. The deputy was gone by that time, and Mr. Wright and I were more than ready to join his high schoool chums for a drink. Or ten.

We'd just pulled into the Cantina when Mr. Wright's phone rang. It was Chelan County Sheriff's dispatcher, who said they'd recovered our stolen car! Did we want them to tow it? Heck no, we didn't want them to tow it. We don't have that kind of money, for crying out loud! Where was it? It was about three miles down the road, pulled over in front of three patrol cars, each with a juvenile in custody.

"Hey, weren't you guys just in a yellow Camaro?" asked one of the deputies. Yeah, that was us. "And wasn't that Expedition just sitting on the side of the highway?" Yeah, that was ours.

Okay, you guys are gonna pee your pants when I tell you how it all went down...

The same deputy had followed our Honda on Friday night and run the plates. Of course, it wasn't a stolen car then. Well, it was a stolen car, but it hadn't been reported as stolen yet. It just came up with our name, and it was headed toward Manson on Highway 150.

Saturday night, he drove past our out-of-gas Expedition, taking note of the license plate. He then drove a couple miles up the road, off the dark roadside, to run the plate number. He was driving by the gas station, saw the pimped out yellow Camaro, and pulled in to get a better look at it. As the Camaro left, he recognized a Honda driving by as the one he'd run the plates on the night before.

A moment after that, he got a call from his dispatcher, informing him that the plate he'd run on the Honda the night before had just come through the system as stolen. Hey! he must have thought. I just saw that car go by!

Remembering that the car had been headed to Manson the night before, he took off in that direction, and apprehended the perps a few miles down the road.

Is that amazing, or what?

My GPS unit was missing, but everything else seemed to still be there. Plus, the three young joyriders (15, 16 and 17) were kind enough to leave us a little "something" behind - a glass pipe and a bag of weed.

Anyone wonder where my GPS unit went? (We gave that stuff to the deputies, by the way.)

So, anyway, with much effort and prayer, I remained faithful, and the Lord gave me my car back. I think that's something to be grateful for, don't you?

Blurted by Christina-Marie Wright at 10:35 AM