Welcome to "20 Questions with..." I want to feature passionate, creative women who are following their dreams. If you're interested in being a 20 Questions feature, let me know, and I'll send you the questionnaire.

Enjoy past installments of 20 Questions here. 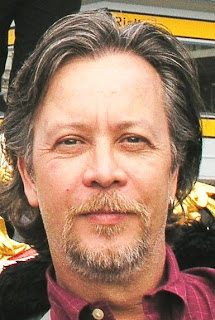 Occupation: Newspaper editor
Company: [Can I leave this blank for professional reasons?]
Website: Robb Grindstaff, Writer
Blog: None yet – I know, I’m an alien
Twitter: @RobbWriter
Pimpalicious link: Can I do two? Dancing in the Dark, an anthology of erotica in which I am honored to have a short story and the opening chapters of Carry Me Away on Authonomy, the novel for which I’m currently seeking agent representation. Yeah, don’t ask why I tend to write female characters – in first person. Three novels so far, all in female first person. Oh yeah, one more – Authors On Show has posted a short story of mine that just won their weekly flash fiction contest. I’m rather proud of that.


About Robb, in two sentences: Robb isn't a woman. But he plays one in his writings.

I’ve been in the daily newspaper business for 30 years, a career that has taken me from small towns in North Carolina and Texas, to Tokyo (where I lived for five years) to Washington, D.C., where I currently live.

My passion is for writing fiction, of which I’ve completed one novel, have two in-progress, and write mostly unpublished and probably unpublishable short stories.

2. Did your passion sidle up next to you and offer to buy you a drink, or did it pimp-slap you and say, “You’re gonna work for me now, see?”

I’ve always wanted to be a writer, and I’ve always been writing as far back as I could remember. I went into journalism because it was a steady job, perhaps because I was smart enough to see that writers don’t actually make any money at it for the most part. Then I got into the business and executive side of newspapers, got married, had a kid, got a mortgage, and writing went on hold for 20 years or so while I gained some life experience.

Then one day a character showed up and ordered me to sit down at the computer and type while she told me her story. Now I’ve had to tell the characters to take a number and wait their turn.

3. Disney is remaking Snow White, and has cast you as the eighth dwarf. What’s your name?

Corny. Only because Sleepy is already taken. I can take a nap anytime, anywhere. I don’t even have to be tired. I lays down. I falls asleep.

4. Are you more of a Jackie, or more of a Marilyn?

5. Peter Pan, in all his lithe nimbleness, has appeared at your window with the intent of whisking you away to someplace fab. All you need to fly is one happy thought… What comes to mind?

6. What makes you feel sexy?

7. If you had all the time in the world, what would you do more of?

Answer more questionnaires designed for women. Travel. Write more and edit less. I mean that both literally and metaphorically. Not feel guilty about a 3-hour nap on a Sunday afternoon.

8. What’s the last thing you bought that later made you scream, “What was I THINKING?”

I never buy anything. I hate shopping.

Warm chocolate chip cookies and a glass of milk. Or a cigarette.

10. What’s something you know you should do for your body, but don’t?

Lay off the cigarettes.

11. What do you want on your tombstone?

12. Let’s talk about your first kiss. What happened?

Tammy. I bit her tongue. She drooled a bit. We bumped teeth and it clicked. I hoped she couldn’t taste the red chili burrito I’d had for dinner.

13. What’s one thing you’d never reveal on a first date?

Well, I’m way overmarried for this question. But pretending I’m on a first date, I’d never admit... uh, sorry, I’m not admitting that on a blog, either.

14. Who would play you in the movie of your life?

15. What’s the one song that makes you feel like you can take on the world? You know – the one you bust out the serious moves for when no one is looking?

17. What real-life dream gets you so excited, it keeps you up at night?

Putting Oprah on hold because Steven Spielberg is on the other line. Okay, I’d settle for a three-book contract that paid just enough advance that I could write full time for three years. Then I’ll worry about what to do after that.

18. If you could go back in time, what advice would you give your 12-year-old self?

Don’t start smoking because the price is going to skyrocket in a few years, and you’ll be treated like a leper or terrorist or something, it won’t be cool anymore, and all your cool friends will be dead from lung cancer or at least they’ll have burned holes in their cars' upholstery but you won’t ,so your car will have a higher resale value. Don’t worry about what other people think. And for crying out loud, don’t bite Tammy’s tongue.

19. Welcome to Suicide Karaoke. You’ve gotta sing. Your life depends on it. What’s the song that’s going to save you?

I’m probably just going to die, then. I cannot do karaoke. No way. But I can do a decent Bob Dylan impersonation, and that’s not really singing, so the answer to this question is blowing in the wind.

20. You’re heading to a potluck. What’s your never-fail dish? Share the recipe!

White meat chicken, a couple good size breasts, cooked in chili powder, cumin, cilantro, a bit of lime juice, or just a packet of Mexican seasoning if you prefer. Don’t ask me how much, I just toss stuff in until it looks the right color.

Mix the chicken with a packet of cream cheese, stir in a handful of diced green chilies.

A dozen corn or so tortillas, maybe 13 or 14 depending on how big your breasts are. Your chicken breasts, I mean. Not yours, personally. Dip them (the tortillas, not your breasts) in hot oil for just a couple seconds to make them soft so they’ll roll up without breaking, but not so long that they get crisp.

A large can of green chili enchilada sauce. Sorry, this part isn’t from scratch. Straight from the can.

Pour just enough sauce in a 9x12 baking dish to cover the bottom.

Dump the rest of the sauce in a big bowl. This is very messy, so have paper towels or a small child available to wipe your hands on. Dip each softened tortilla in the bowl of sauce to cover it, then wipe off the excess or let it drip dry a bit. Put a tablespoon or so of the chicken mixture into the tortilla, roll it up tight, put it in the pan.

Repeat until the pan is full. If you’ve got more chicken mixture left, squeeze a couple more into the pan. It’s okay to overcrowd them – chickens are used to it.

Pour the remaining sauce over the whole pan of enchiladas.

Spread on a couple handfuls of shredded cheese – I prefer a white cheese - queso blanco, if you can get it. But yellow cheese like cheddar works too. Not blue cheese. Or green. If your cheese is green, throw it away.

Cover with aluminum foil and bake at 350 degrees until you remember to go check on them; about 20-30 minutes.

Remove the foil and cook until the next commercial or until the cheese is melted and bubbly.

Blurted by Christina-Marie Wright at 5:00 AM