My Mother had Magical Balls 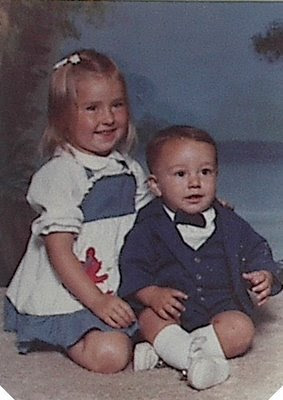 When I was a child, my mother drank. A lot.

While I may be tempted to assign blame for my Southern Comfort habit to dear Mom, her choice of beverage was loose tea, which she brewed in little stainless steel balls. The balls in question had screw-on tops and small holes to allow the steeped tea to escape while keeping the leaves inside. The finishing - and ultimate - touch was a small chain from the top that ended with a tiny hook to slip over the edge of the tea cup while suspending the ball in hot water.

They were magical, those balls. If I was good, I got to play with them, grasping the hooks between my small fingers and swinging them above my head like medieval weapons. They were also excellent for hiding small objects inside. I'm sure Mom delighted in finding rocks, leaves and other such childhood treasures each time she set about brewing a cup of tea.

Mom had all sorts of tricks and rewards for keeping my brother and me on our best behavior. One of my favorites was being allowed to strum a wooden spoon over a baker's cooling rack while Mom was busy in the kitchen. For extra-special behavior, we might be allowed to beat on a saucepan with a rubber spatula.

I tried it with Curlytop and Snugglebug. They beat each other with the wooden spoons.

Another of Mom's tricks was the Goodness Cup. In reality, I believe it was an orphan from a punchbowl set that Mom scored at a rummage sale, but I can't be sure because the cut glass sparkled like every young girl's fantasy, and it may well have been made entirely of diamonds.

The idea behind the Goodness Cup was that whichever kid was the most kindhearted, the most compliant, the most sweet during the day got to drink from the cup during dinnertime. At least, that was the theory. I don't remember ever drinking from the cup, but I do remember the wrestling matches that took place between Bubba and me when Mom announced who won the evening's Goodness Cup. When the fight broke out, the cup would return to the cupboard, never touching a child's lip.

Kids today are different. They all have cooler stuff than me... what would they want with my tea strainer, when they have handheld video game machines and mp3 players?

What kind of mom am I? There's nothing left to bribe grace them with.

Blurted by Christina-Marie Wright at 11:08 AM