Meeting Mr. Right… Or was it Wright? 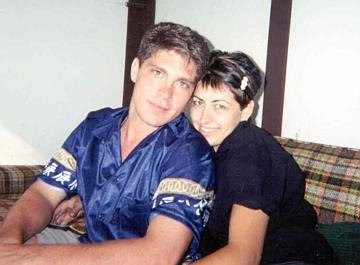 Mr. Wright and I will celebrate a number of years of marriage next week. Unfortunately, there is some question as to exactly how many years we’ve been married. The number of years isn’t actually in question by anyone but me, but I’d never admit to Mr. Wright that I can never remember what year we got married. Remembering my son’s birthday, along with the birth dates of six children I didn’t give birth to, completely exhausts my Important Dates to Remember function.

The summer tourist invasion had retreated from Chelan, leaving the locals bleary-eyed and stumbling around their little resort community; tired but already missing the extra cash liberated from out-of-town pocketbooks during the peak season. By the time mid-August rolled around, the college kids had returned to school, families were all settled into their fall routines, and the only people drinking in the bar were the local folks who’d served and smiled and suppressed weary sighs all summer long.

I managed the bar in a Chelan restaurant and, delighted by the opportunity to clock out early for the first time in a long while, I scooted onto a barstool, ordered a cup of coffee from my capable employee, and began entertaining a few friends seated at the end of the bar with an animated story.

My riveting tale was rudely interrupted by two boisterous out-of-town dudes who obviously didn’t get the memo signaling the official end of tourist season. (You know the famous local question, right? “If it’s tourist season, does it mean we can shoot ‘em?”) One of the guys ordered drinks from the bar, while the other sat on the vacant barstool next to me and commenced loud conversation with everyone in the room. Everyone, that is, but me.

The foolish newcomer spent nearly ten minutes greeting and engaging every single person in the place, leaning across me to talk, while his companion chatted with the bartender. The loud one was very good-looking, but he never so much as glanced at me.

The Gonzo Mama is unaccustomed to being ignored.

Nonetheless, that’s exactly what the oblivious male next to me did as I sat, arms folded, and fumed. Finally, he took a deep breath, looked directly at me, placed a hand on my arm and asked, “Oh – and who are you?” His tone said, “Why, I didn’t even see you there! Let’s be friends!” but his teasing eyes said, “I can tell it’s driving you crazy that I’m ignoring you, and I’m enjoying driving you nuts.”

“Who am I?” I sputtered. “Who am I? I’m Christina-Marie. I’m the manager here. This is my place, these are my people, and that’s my spotlight you’re warming your rump on. Just WHO do you think YOU are?”

The man flashed an arrogant smile and said, “Me? Why, I’m Mr. Right!”

With an impatient laugh, I countered, “Look, I’ve been a bartender for far too long. I’ve heard every lousy pickup line in the book, and that’s one of the oldest. You need new material.” I rolled my eyes and waited for him to slink away.

Instead, he handed me his business card.

Photo: Snapped by a friend a couple days after Mr. Wright and I met. Look how young we were!

Blurted by Christina-Marie Wright at 10:08 AM