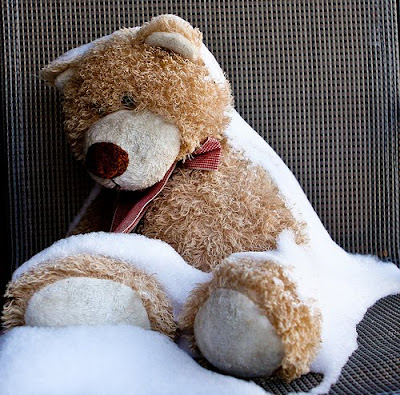 It’s not unusual for a child to have a treasured blanket or stuffed animal, and three-year-old Snugglebug is no exception. Her “lovey” of choice is a small round pillow, decorated like a soccer ball, left behind when Princess went to college.

It’s filled with tiny micro-beads and makes a beautiful “SWOOSH” sound when it moves. Snugglebug’s lovey is completely pliable, molding to the curve of her neck or into the bend of her elbow. At times, it doubles as a helmet, its sand-like beads forming a mushroom cap over her precious head.

Up and down stairs, behind the sofa, into the bathroom, to the dinner table… Snugglebug takes that pillow with her everywhere. Rather, she did – until last night.

Snugglebug isn’t a terribly sound sleeper. Most nights, she wakes, creeps down the stairs, and crawls into bed with Mr. Wright and me. It’s not a surprise to find Snugglebug in our bed when I wake up.

It is, however, a surprise to find that a blizzard has descended upon my bedroom while I slept.

As close as I can figure, the pillow sprung a leak at some point last night. When Snugglebug made her nightly pilgrimage to our room, she brought her lovey along, leaving behind a trail of white plastic pellets, fine as grains of salt.

I’m almost sorry that I didn’t witness what must have happened next – a joyful, ecstatic dance marked by animated shaking of the punctured pillow and a silent storm of weightless, dust-fine, white “snow.” She made it snow on the floor! In Mommy’s shoes! On top of our Chocolate Lab, Rufus! On Daddy’s nightstand! For her grand finale, Snugglebug emptied the collapsing belly of the ball on top of Mommy and Daddy while they slept. Then, exhausted, she collapsed into a happy heap atop a mountain of “snow” at the foot of the bed, where she drifted off to sleep.

With newspaper headlines broadcasting incidents of “man-caused disasters,” as well as recent natural disasters, I wouldn’t be surprised if CNN calls me to learn more about this “toddler-caused natural disaster.” Imagine… a blizzard in my very own bedroom!

Mr. Wright muttered, as he switched on the Shop Vac, “There must be a million of these pellets.” I disagree. I’m pretty sure there were at least a trillion. That’s “trillion,” with a “T.”

I had a friend whose son claimed a satin nightgown as his lovey. The boy’s obsession didn’t pose much of a problem until he started preschool, at which point carrying around a size 12 nightgown became a little ridiculous. My friend cut the nightie into handkerchief-sized pieces and tucked one into her son’s jacket pocket each day.

Another mom I knew took a photo of her daughter’s favorite stuffed animal, made several prints, and laminated them for a portable, instant lovey connection after the girl’s old friend finally fell to pieces.

Yet another parent – a smart dad – bought six copies of a teddy bear when he noticed his son had a strong preference for a particular lovey. The dad put one in the car, one at Grandma’s house, one in the diaper bag, and three in the closet in case a lovey emergency arose. When a lovey goes missing or becomes damaged, seconds count. This dad was clever enough to have back-ups.

Countless parents have stitched or patched lovies time and again. While I’m thinking of stuffing the skin of the dearly departed with buckwheat hulls or some other non-snowy material, I’m holding out hope that the dramatic death scene provided an adequate farewell. Maybe Snugglebug is growing up. Perhaps she’s matured past the point of needing a lovey to get through the day or to sleep.

Of course, Mama has her coffee to get her through the day and her Southern Comfort when she needs a little help getting to sleep. Some of us never give up our lovies, I suppose – the lovies just change as we get older.

Have any of your children’s “lovies” bit the dust (so to speak!) in a funny or dramatic manner? Tell me all about it!