I Can't Take Her Anywhere: Guest Post by Mr. Wright 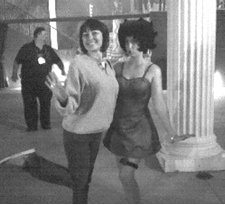 I can’t take her anywhere.

If there is one thing I can say about The Gonzo Mama, it is that I cannot take her anywhere, at least without her causing a scene of epic proportions.

Now, I am not saying that going out in public with The Gonzo Mama is going to mean getting into a fight with her, or because of her. I am saying that it is always exciting.

To put it in perspective, she has actually only incited one riot resulting in physical violence, and me having fight off not one, not two, but three douche bags over her calling to their attention that their drunken slurring of a British slang term for a cigarette was inappropriate and offensive.

A strike for political correctness and sexual orientation sensitivity, and a strike that left my eye swelled like a blueberry on Major League steroids.

Now, I am not talking about making a comment to creepy lurker dudes, or telling off drunks in a club who place an errant hand on her backside. Those are not even in the same league or sport.

The typical norm is much more along the lines of brutally honest critical opinions that, by comparison, make Simon Cowell look like a patronizing butt smoocher.

I must admit, many people must find it helpful to have their grammar corrected in public.

And who would not want to know that the root beer they are drinking has most likely been filtered through fish guts?

Even the finest chefs could not object to the constructive criticism of having their work compared to hamster vomit.

I would find playing an extra in an off-Broadway production of Brokeback Mountain preferable to having to relive Gonzo Mama’s frequent inquires about other people’s fashion choices.

I will share one time, lobbying at the capitol, we passed a lady exercising her right to free speech by standing silent, holding a sign promote valuing the sanctity of life for unborn children. Not a shock sign, showing pictures of a disfigured fetus, but a tasteful picture of a baby. A rather large gentleman was badgering her and pelting her with obscenities. As we walked by he yelled a derogatory comment about the Bible. The Gonzo Mama interjected, “Well, I believe in the Bible.” His response was quick. “If you believe in the Bible, then you are a firetrucking idiot!” (Please see other writing of The Gonzo Mama for the back story on “firetrucking.”)

At that point, I instructed The Gonzo Mama to keep walking. I drew this outspoken individual close, looked him in the eye and in a low voice calmly discussed his options with him. He looked at me. I assured him, “I am serious as a heart attack.” He quietly chose the option of turning and walking away, as opposed to having his guts stomped in by a kilted tassel loafer worn by a man in a rather smart three button suit.

On our most recent trip, we found ourselves in a convention tradeshow and at a booth offering free CFL light bulbs (the twisty kind). They were promoting helping the environment. The Gonzo Mama pointed out these twisty buggers contained mercury that ends up in landfills and anywhere these things are broken. They are, in fact, much worse for the environment than traditional incandescent bulbs. Not withstanding they make some contribution to the environment, in that they lead to less power consumption of electricity generated by use of coal of fossil fuels.

The Gonzo Mama powers her abode with power that is CO2-free, from renewable hydroelectric power, so even that is not an issue. Twisty bad, old-school good. As I faded into a side conversation with another attendee, the Gonzo Mama entered into an increasingly heated discussion with the sales representative, moving to the topic of veganism. When the rep offered, “Well, in college I tried being a vegetarian for awhile, but it was just a phase,” The Gonzo Mama’s reply was, “Well, in college many girls are lesbian for awhile.” I took my cue and ushered The Gonzo Mama hurriedly away with the promise of a venti soy chai.

[The Gonzo Mama MUST interject here. The woman was saying, "But you haven't always been vegan, right? I mean, people don't RAISE THEIR KIDS LIKE THAT, do they?" I was responding, "Sure, some people do, and CPS even lets them keep their kids, sometimes..." when she busted out with the "it's just a phase" thing. What was I SUPPOSED to say?]

Life is meant to be lived to the fullest. One thing that I can count on is I can’t take her anywhere, and expect it to be boring.

Blurted by Christina-Marie Wright at 10:42 PM