What kind of an insomnia-plagued masochist would work through the night, forgoing sleep and the promise of sweet dreams, baking and decorating custom cakes for four children who probably aren’t as interested in the cakes’ appearance as in the cakes’ taste?
A mother; that’s what kind of masochist.
The closure of Beebe Bridge delayed the birthday celebrations for Curlytop, who turned four on August 19th; Pepper, who turned thirteen on September 3rd; and Snugglebug, who turned three on September 13th. After more than three years, the adoptions for Curlytop and Snugglebug finalized on September 22nd, and Pockets turned 15 the day after.
Clearly, a party of epic proportions was in order, once the bridge reopened and all our beloved friends and family were able to reach our home with minimal inconvenience.We decided on a Saturday, so as not to interfere with Pockets’s football games on Fridays. Pepper, of course, wanted a slumber party. How could we deny her? A girl only turns thirteen once, and if she wishes to celebrate by having seventeen girls stay the night, so be it.
I stocked my pantry with flour, sugar, food coloring, sugar, cocoa powder, and more sugar. My plan was to bake the cakes during the day on Friday, and decorate them Friday night. Of course, my plan failed to allocate time for the appointments I’d scheduled on Friday and the football game that night. As a result, I started baking at around 10:30 p.m.
Curlytop and Snugglebug each needed a birthday cake, of course, as did Pepper and Pockets. What about the adoption? Surely we needed a cake to celebrate the adoption! That’s how I found myself, at 4:00 a.m., baking a fifth cake and mixing up ten pounds or so of vegan “buttercream” frosting.
Curse my vegan principles, which prevent me from using a standard cake mix and canned frosting! After all, why spend all night making cakes I can’t eat?
Deciding on the decoration for Pockets’s cake was a no-brainer: football, of course. I dyed a batch of frosting green, fashioned goal posts out of pipe cleaners, and placed a small toy football in the center. Done! 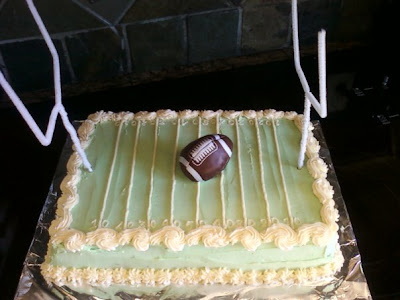 Pepper plays volleyball, but I had no idea how to draw a volleyball, let alone frost one. In a stroke of brilliance, I mixed two more cakes at 4:15, planning a glorious tower of alternating chocolate and vanilla layers, with strawberry filling and raspberry frosting, with rosebuds creeping from the bottom to the top of the third layer. It took about three hours, and the resulting creation looked not unlike a matrimonial monstrosity. 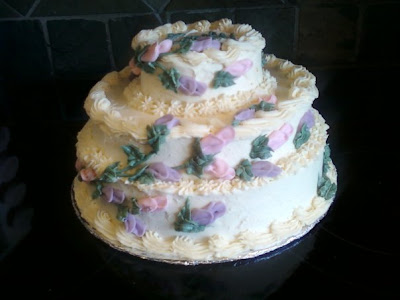 (Indeed, upon seeing the finished product, one of Pepper’s friends exclaimed, “I want my wedding cake to look just like that!”)
Okay. Maybe I got carried away.
Determined to keep things simple for the “adoption cake,” I brainstormed what I could do with the heart-shaped strawberry cake I’d baked. I mean, a heart is just a heart, right? What can a person do with a heart? Unless…
I turned the cake upside-down, placing the point upward. Two hours later, two chubby-cheeked princesses with pointed hats meeting at the tip of the heart, complete with trailing satin ribbons, resided on top of the cake. 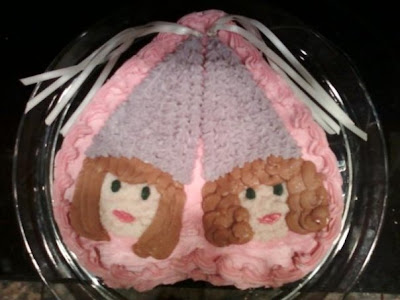 (I have a step-by-step how-to with photos for this cake here)
By 9:30 a.m., the sun was glaring in my kitchen window. The kids were up. Mr. Wright was up. Me? I was on my seventh cup of coffee, covered in flour, with two more cakes to frost and quite a few clumps of frosting in my hair. I covered the two small star-shaped cakes for Curlytop and Snugglebug with pink frosting, piped their names on top, and collapsed into bed. 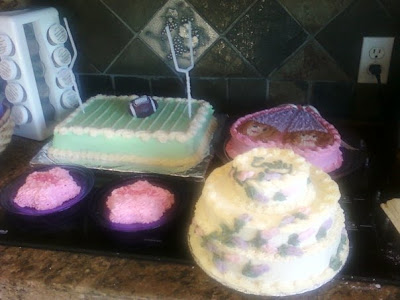 It’s inevitable that, when I decorate custom cakes for my kids, some party guest will ask me if I’d be willing to make the cake for their kid’s birthday.

This special kind of self-torture is something I only perform for my own kids, thank you very much.

By the way, can anyone tell me how long leftover cake can be frozen? Or rent me some freezer space?

Blurted by Christina-Marie Wright at 5:00 AM