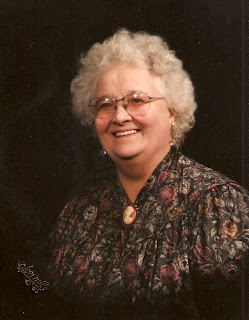 Helen Margaret Evans was born October 23, 1919 at Brown Place ranch near Oxford, Kansas to Lee Roy Evans and Amanda Albertine Cavener Evans. She was the sixth of seven children. In the spring of 1928, the family followed the harvest to Washington State, arriving in the fall. They camped in a park their first night in Seattle, and settled in Cathcart Heights, now known as Clearview, about six miles south of Snohomish.

During her high school years, Helen enjoyed singing as the soloist for the a cappella choir and graduated from Snohomish High School in 1937. She married Chester Clair Nichols on June 27th, 1937 in a double ceremony at which her older sister, Irma, was also married.

Helen and Chet moved to Manson in 1947. They built a home in 1948, planted a small orchard, were longtime members of the Methodist church in Manson, and were community leaders in 4-H and Boy Scouts. Chet built and operated an auto repair shop, and Helen sorted and packed apples while they raised their six children.

In 1965, they rented out their home and moved to Seattle, where Chet worked for Boeing. They became involved in the Methodist church on Queen Anne Hill and sold Chelan Valley fruit, grown by orchardist friends back in Manson. Helen was widely known in the Seattle area for her skills in baking and decorating cakes for special occasions. They returned to their home in Manson in 1975, later becoming grower-members of Manson Growers.

Helen was an avid reader, a talented baker, a lover of angels and a crossword puzzle enthusiast. She enjoyed collecting dolls from around the world and playing bingo with friends at the American Legion Hall in Manson and, more recently, at the Chelan Eagles. Throughout her life, she was an advocate for the physical, emotional and spiritual well-being of children, opening her home time and again to community children in need.

On September 23, 2009, with family members by her side at Wenatchee, Washington’s Central Washington Hospital, Helen went home to the Lord, joining her husband, who passed away on July 14, 1989 in Chelan, Washington.

A memorial service will be held on Saturday, October 24, 2009 at 2:00 p.m. at the Methodist church in Manson. Services will be officiated by Rev. Laurie Aleona, and fellowship and refreshments will follow.

The family asks that no flowers be sent. Those wishing to honor Helen may instead make a contribution to their favorite charity in her name.

Blurted by Christina-Marie Wright at 10:43 PM