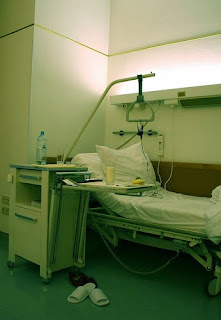 My family is large, somewhat private, and rather spread out. We don't frequently gather in one place, so it was strange waiting at the hospital these last few days for Grandma's passing.

Grandma raised six children, each as different and dynamic as our distinct central Washington seasons.

There's my oldest uncle who, by all rights, is old enough to be my grandfather. His health isn't so great and he lives over four hours away. Even though he can't sit for more than thirty minutes at a stretch, he was determined to find a way to get to Grandma's side before she passed.

My middle uncle was heading to Arizona for the winter when Grandma went to the hospital, and he wasn't turning around. I think it was easier for him to deal with what was going on from a distance.

My older aunt has had two concussions in the last year and, as a result, has some memory issues. Some of us don't know if she's going to follow us from one minute to the next.

My youngest uncle is the steamroller. He communicates as if words are expensive but volume is free. "NO SURGERY." "MORE MORPHINE." God help anyone who tries to defy him.

My mom's coping mechanism is to use her calm, subdued, pacifying voice. It makes people really uneasy.

My younger aunt is the one who has lived with Grandma for years. She probably knows more than anyone else about Grandma's medical history, but she's also the least likely to speak up.

Cousins were there. Not all of them, but enough to preserve my sanity. While the displays of bullying ("You don't know what you're talking about, so leave it to the people who do!") and passive-aggressive undermining ("Well, no one asked my opinion, but if they had, I would have said...") continued between our parents in Grandma's hospital room, the cousins and I sat in the courtyard and chain-smoked. "When will they start acting like adults?" we asked each other.

When people got upset enough with one another to stalk or storm out of the room, I slipped in, requested a bible from the nurses' station, and read selected Psalms to Grandma. Not Psalm 23, which I always associate with death and scariness. I know it wasn't written to be morbid, but it's read so often at funerals that I always think of death when I hear it.

I focused on Psalm 20, sang hymns to her and used my phone to Google the words to "I've Got a Mansion" when I couldn't remember all of the verses, daring the nurses to say just one word about the ban on electronic devices in the hospital.

I held her hand while she tried to block out the pain enough to sleep. "I've gotta go," she said. "I know you do, Grandma. It's okay to go. Jesus is the Great Healer, and he's going to restore you in heaven. You'll be as young and beautiful as you ever were. Papa will be waiting for you, and you'll dance, Grandma! Just think of how you'll dance!"

My cousin asked everyone to recall their favorite memory of Grandma. I offered the story Grandma shared about being a teen, asking Great-Grandma for permission to go to the community social. Great-Grandma was a devout Christian of the highest regard, and didn't allow so much as a deck of cards in her home as, clearly; cards are instruments of the devil. Great-Grandma wasn't so hot on dancing, either, because, Lord knows, the devil likes to dance. Anyway, Grandma asked Great-Grandma if she could go to the community social. She expected her mother to deny her request, since there was to be dancing at the event. Great-Grandma said, “I'm not going to tell you that you can't go, but if the good Lord comes back while you're in there dancing, He's not coming in there after you."

Grandma also used to share a story about her brother who, as a child, was instructed by Great-Grandma to offer a lady visitor a candy from his bag of goodies. The young boy opened his bag and graciously told the guest, "Take a lot... take TWO!"

Every time I offer someone a piece of gum or a potato chip, I always say, "Take a lot. Take two!" and think of Grandma's story.

I weep for the stories I can’t remember.

In the end, Grandma had enough morphine to sleep without pain. Her breaths got further and further apart, and finally she took a breath and... didn't take another one.

Thank you, Jesus, for taking her in peace.


Blurted by Christina-Marie Wright at 11:01 AM