Happy Virtual Girls' Night Out (VGNO)! If this is your first time, Welcome! Want to join in on the fun? Head over to Ann's to get on the VGNO Linky, and start bloghopping!

So, it's almost time for school to start. Most of our kids go back on September 2nd (a weird Wednesday commencement, because, why go back for just two days before the long weekend?). Princess, of course, is safely moved in at Washington State University. Her classes started on Monday. Curlytop and Snugglebug's special ed preschool doesn't start until nearly the end of September, but the rest will go back on the 2nd.

The Dude is a junior this year, feeling every bit the sixteen years old he is. Pockets is starting his sophomore year, and the middle schoolers, Pepper and GirlWonder, are starting eighth grade and sixth grade, respectively.

Having three teens who are extremely interested in the opposite sex has caused me to remember myself at their ages. Growing up in a resort community, the end of summer meant the end of summer "romance," loosely defined as anything from hanging out and holding hands with tourist boys to, in later years, making out on moonlit beaches and sneaking out for late-night rendezvous. If I haven't mentioned it before, I was an extremely ill-behaved teen.

A couple I know just "broke up" on Facebook. That is to say that "So-and-So is no longer listed as in a relationship." Genius! How convenient to be able to let everyone know, with just a click, that you and your not-so-true love have ended things! It saves the awkwardness of going to a cocktail party in six months, having someone ask, "Where is So-and-So?" and having to explain that it's been over for ages.

Some relationships die naturally, some get a little help. A friend shared this video with me today, a hilarious, must-see movie about how Facebook can put a strain on a couple's relationship:

(If you're seeing this via blog import to Facebook or in a reader, you may not be able to view the embedded video. No worries - just go directly to the link here.)

Anyway, enough about breaking up. It's hard to do, you know. How about a Girls' Night Out appetizer?

If you know anyone with a garden, you're probably up to your ears in zucchini this time of year. A friend recently warned me not to leave my car door unlocked, lest I return to find it filled with zucchinis, left by gardeners, desperate to unload their surplus of squash. Terrifying, I know, but true.

a food dehydrator (I use the Ronco old-school model, 'cause that's how I roll, but you could use a nifty, modern one like this one

all that zucchini you've had dumped off on you

Line the dehydrator trays with waxed paper. Cut the zucchini into 1/8"-thick slices. Coat in shoyu or tamari, arrange on trays and sprinkle with ginger. Flip the slices over, sprinkle ginger over them, and turn on the dehydrator. Follow your dehydrator's instructions for drying (mine say to rotate trays every 12 hours, and the zucchini chips take about a day and a half to get crisp and brittle - yours may take longer or much, much less time).

Here are mine, preparing to dry: 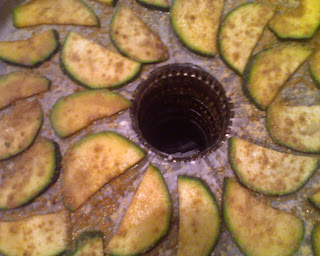 Blurted by Christina-Marie Wright at 8:35 PM