The First Day of School... Kind Of 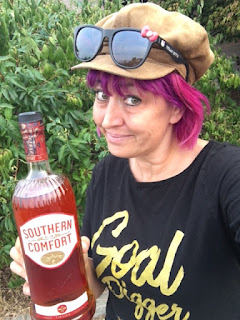 We all got up this morning, with big plans.

Mine was to get the kids off to school, send Pumpkin off with Mr. Wright to take pictures of some house a million miles away, enjoy an adult beverage or six, and take a bubble bath. Maybe crawl back into bed. Whatever it ended up being, it was going to be gloriously kid-free. (See photo.)

So, I got the girls on the bus, and off to middle school: 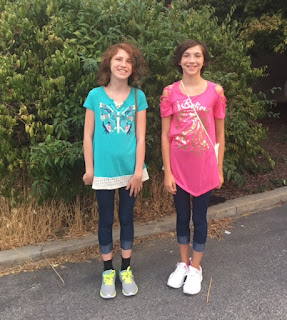 And got the boys ready: 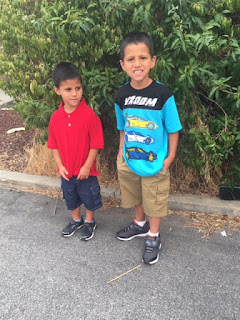 But I decided to take the boys to school, myself, rather than putting them on the bus, because Bravo had not yet been assigned to a teacher.

Here we are, on the first day of school, and the kid DOESN'T HAVE A TEACHER, YET.

Our district has a pre-K program available for kids who qualify for it. Basically, if their assessments show they're deficient by a certain percentage in one area, or a cumulative percentage over all areas, they're "in." Well, Bravo came to us with an IEP, so he was "in." He finished out the year with the pre-K program, and at the end of school, his teachers told him how much they would miss him, and how excited they were that he was now going to be a BIG KINDERGARTNER! Woot!

They may have also said something like I needed to fill out a packet for Kindergarten, if he was going to be in district when school started, but, you know, we're doing kinship care, and the plan is for him to go home, so back in June, I had no idea if he was going to be around when fall came, so I sort of filed the information in my "Think About It Later" file.

And there it stayed. Right up until Monday, when I was reminded that he still wasn't registered for school. Aw, firetruck...

So, on Monday, I packed the baby into the stroller, walked a couple blocks to the district office, and filled out the paperwork for him to be a BIG KINDERGARTNER, and turned it in (not without some struggle, because I don't have access to a lot of necessary documents, like his birth certificate, and so on). But, I got it done.

Then, I was reminded that if I wanted him to attend the same school as his brother, I would need to "choice" him, and that was a completely different set of forms.

Let me back up a little further...

A few years ago, the boundary lines for our schools changed. Our house is in this weird little pocket that got changed from the school Curlytop and Snugglebug had been attending, to this other school. At that time, we sat down with the team, and determined it would be best for the girls to stay in the school they were already in, since their supports were already set up, we had a great working relationship with the team, and it was a familiar environment for them. So, we just had to "choice" them to the school they were already attending. And it was no big deal.

So, when we got the boys, we "choiced" Alpha into the school Snugglebug was, and had been attending for years, because... one bus, convenience, and all that. (Curlytop had moved on to middle school by that time. Interestingly, she moved on to a middle school out of our boundary, because of the elementary school she had been "choiced" into. Snugglebug joined her, there, this year.)

Anyway, I filled out the choice forms, and was told we should have an approval by Tuesday, unless for some weird reason the superintendent decided to deny it. Good thing, since school starts on Wednesday, right?

Yesterday, I got the call that it had been approved, which was awesome. I asked who his teacher would be, and the district rep didn't know, but said the school should have that information for me.

I was tied up yesterday for quite a while, and didn't get a chance to call the school until after everyone had already left the office, so I was a little anxious, knowing school would be starting today, and poor Bravo still didn't know who his teacher was.

So, this morning, I just drove the boys to school, and trotted into the office with Bravo. "Who's his teacher?" I asked.

"We don't have him assigned to a teacher, but we should have that information for you by tomorrow."

BY TOMORROW? I mean, this kid was sitting there, in the office, with his backpack on, and his shoes that weren't scuffed, yet, and his sweet little clean face, and all the other kids were heading off to their classrooms, and we would know tomorrow who his teacher was?

I got a blank stare from the secretary. After a moment, she recovered, and said, "Kindergarten starts next week. You know that, right?"

Anyway, here's what my plans have been changed to, today: 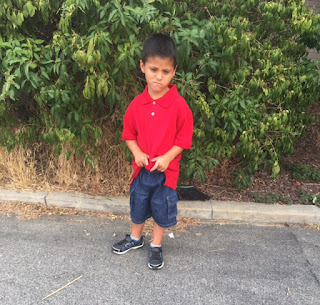 I think he's a little disappointed. I am, too.

I swear, Southern Comfort, we will see each other again, soon. 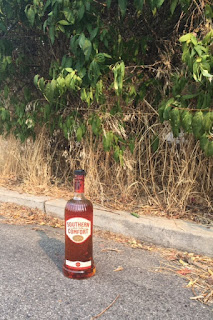 Blurted by Christina-Marie Wright at 10:36 AM