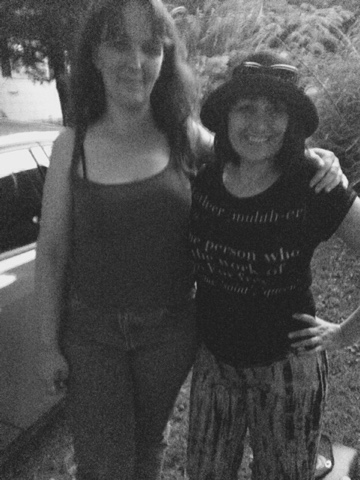 Yesterday, I took my clothes off in front of my college friend and her husband. I also said the "f-word" A LOT. The "f-word." You know... "firetruck," because nice girls don't blog that other f-word. Both the nudity and the cursing were completely justified, and I am not ashamed. I stand by my decision.
Okay, let me back up a little... I'm currently in Nevada (pronounced Ne-VAY-da, y'all), Missouri -- home of my alma mater, Cottey College -- with GirlWonder. She is attending a women's leadership workshop, which will earn her a $12,000 scholarship to Cottey, if she chooses to attend (and I hope she will). Her schedule is pretty packed,so I'm only able to hang with her for a few moments here and there.
I'm spending most of my time getting reacquainted with Nevada (oh, how I've missed fireflies!), hanging out in a tiny hotel room, and spending quality time reconnecting with Frankie Stardust, my David Bowie-crazed college friend who may or may not have executed the perfect Frank N. Furter costuming for a showing of Rocky Horror Picture Show in Kansas City freshman year, and her darling hubby, Leatherboy.
Yesterday, I was super-excited to go out bison-spotting with Frankie. Apparently, there's a herd of wild bison which hangs out around some sort of campground and nature preserve located near neighboring Liberal, Missouri.
As an aside, as we drove through, we jokingly speculated about what sort of "liberal" ideology may have earned the town its name, back in the 1800s, when it was founded. I supposed that, perhaps, it was founded by "the sort of progressive bastards who thought it acceptable for women to show their ankles." As it turns out, it was actually founded to be a town in which Christians were not allowed, and atheism reigned. I snagged this from Wikipedia:

Liberal, Missouri, named after the Liberal League in Lamar, Missouri (to which the town's organizer belonged), was started as an atheist, "freethinker" utopia in 1880 by George Walser, an anti-religionist, agnostic lawyer. He bought 2,000 acres (8 km2) of land and advertised across the country for atheists to come and

"found a town without a church, [w]here unbelievers could bring up their children without religious training," and where Christians were not allowed. "His idea was to build up a town that should exclusively be the home of Infidels...a town that should have neither God, Hell, Church, nor Saloon." Some of the early inhabitants of Liberal even encouraged other infidels to move to their town by publishing an advertisement which boasted that Liberal "is the only town of its size in the United States without a priest, preacher, church, saloon, God, Jesus, hell or devil."

I'll have to go back and embed links, later, but I'm posting from my iPad app at the moment. Also? I'll bet those atheists were exactly the type of despicable progressives who did let women show their ankles.

Anyway, so back to the bison-spotting... We drove along the dirt road, keeping our peepers peeled for a glimpse of the bison, or maybe even some elk, which are also known to hang there. 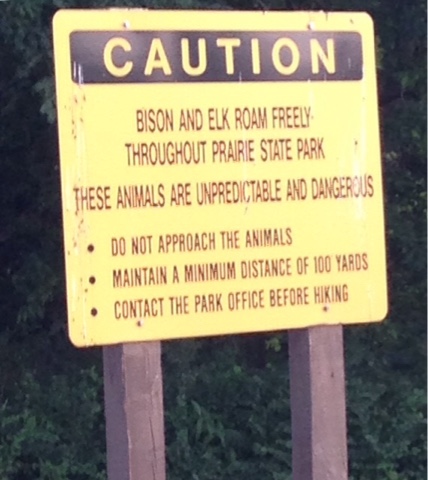 The bashful bison eluded us, so we pulled into what we'd call -- back in Washington -- a trailhead, but Missouri is pretty much as flat as my chest before age 17 (late bloomer, I was), so I'll call it a "path head." Because, you know, "trails" are for hiking. "Paths" are for walking. So, we walked.

I wasn't exactly dressed for hiking. Or walking, as it happened. I was wearing long, flowy pants and little black flats, but I wasn't going to let my lack of country-appropriate attire get in my way, because... BISON. I wanted to see the bison, yo!

We began walking, and though we didn't see any bison, I did find a cute little box turtle, which played peek-a-boo with me. Awwwwww! 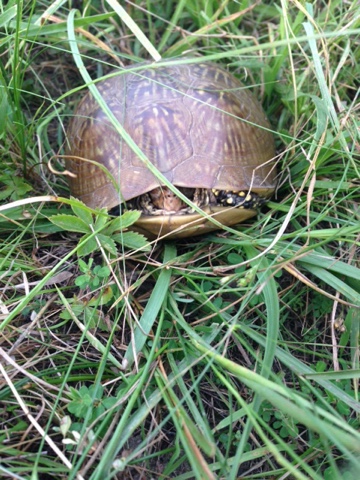 What happened next might not shock anyone familiar with the -- ahem -- actual outdoors, but as my misadventures with all things nature have been extensively documented, I'm sure y'all know it sure as heck was a bloody shock to me.

To avoid a rut in the path, I veered to the left side of the path (I would later read, on the Missouri Parks website, I should always stay in the center of the path in order to diminish or avoid certain risks, which shall be explained later in the post. Very soon, actually).

My flowy pants got caught on a bramble, and I had to stop to untangle them before proceeding. A few more steps down the path, I realized something was EATING ME.

"Holy FIRETRUCK!" I screamed. "What the firetruck IS that firetrucking THING?!"

I brushed and swatted at the vampiric creature attached to my wrist, but it wouldn't... let... go.

I slyly changed tactics from brushing and swatting to hysterical screaming and jumping around, to no avail. Frankie calmly walked over, plucked the damn thing off, flicked it away, and said, "It's a tick."

"WHAT?! A mother-firetrucking TICK?! Are there more? Ohmigod... ARE THERE MORE?"

Oh, yes... There were more. A couple dozen more. At least maybe a million, now that I think about it.

They were on my pants. They were IN my pants. On my shirt. IN my shirt. In my hair. On my mother-firetrucking BODY, sucking my passive VEGAN BLOOD. And for every one we pulled off, eleventy billion more showed up.

I swear, I'm pretty sure I was being "jumped in" to a gang. The Missouri Tick Gang was jumping me in, and I hadn't even firetrucking pledged, or whatever it is you do to get into gangs these days.

So, off I went, running back down the trail -- I mean, path -- plucking off aggressive tick gang members (I'm pretty sure these were Bloods, even though they weren't sporting their bandanas), screaming at the top of my lungs, "Firetruck the bison! I am so firetrucking DONE with nature! Firetruck Missouri, and its state-sanctioned firetrucking parks of DEATH!" with Frankie behind me, and Leatherboy behind her.

Leatherboy pointed to a field, far, far away (but still visible, because you can pretty much see the entire state of Missouri from any point within it, it's so flat) and said, "Oh, look... There are the bison."

Believe it or not, I didn't really care.

We'd reached the car, where I announced, "This is your final warning... I am about to take all my clothes off, right NOW." And that's exactly what I did. My pants were covered in ticks, both on the outside, and the inside. My shirt was the same way. And -- horror of horrors -- several of those monsters were attached to my legs, abdomen, and back. Frankie had to help me pull them off.

I checked my clothing again, because NO WAY was I going to take any unexpected passengers into the car with me, put my clothes back on, and got into the car.

Before I could pull out, Frankie reached over and pulled another tick off my pants. She opened the door to flick it away, and before she even had her door closed, I found another one.

Ticks are like the mother-firetrucking Borg, or something... They must assimilate every fiber they touch, and turn it into a tick Borg drone of some sort, because they were MULTIPLYING.

I'm not going to tell you about how, when I got back to the hotel, I found another tick on my head, panicked, and flung it off my onto the brown carpet, where it was perfectly camoflagued and is probably still lurking and waiting for me.

I'm also not going to tell you about how I pulled EIGHT MORE ticks off my legs (because my thighs are luscious, ya know) and belly after I stripped in the bathroom

I'm certainly not going to tell you about how I almost torched my firetrucking clothes, because they are obviously now part of the tick Borg (I settled for sealing them in gallon-sized Ziploc bags).

Nah... Instead, I'll tell you about the little turtle in the middle of the road on the way back. He was trying to cross the highway, but I was scared he was going to get hit, so I stopped, picked him up, and gently helped him to the other side of the road. When I picked him up, he hissed at me, but when I put him down in the soft vegetation on the other side, he was really grateful, and turtle-scampered away. 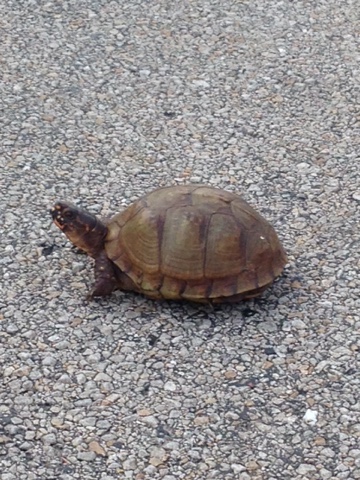 Seriously, I hope the ticks don't get him. He might have been safer taking his chances with the speeding cars.

Blurted by Christina-Marie Wright at 9:18 PM