This tribute is respectfully reposted from 2011.

Paige Farley-Hackel of Newton, Massachusetts was a motivational speaker and writer, on the verge of her dreams. Her new radio program, "Spiritually Speaking," was preparing to hit the air, and she had lofty goals of appearing on the Oprah Winfrey Show - or of becoming Oprah's competition. She had a Master's degree in substance abuse counseling, and was a tireless advocate for the Salvation Army.

In keeping with her passion for spiritual growth, 46-year-old Paige was headed to California for a conference at Deepak Chopra's Center for Well Being on September 11, 2001. She was traveling with her best friend, Ruth Magdaline McCourt, and McCourt's four-year-old daughter, Juliana. Together, they'd celebrate Paige's certification at the Center for completion of the Debbie Ford Shadow Process and take Juliana ("Miss J") to Disneyland.

The group ended up flying out of Boston on different airlines through the use of frequent flier miles - Paige on American Airlines Flight 11, and Ruth and Miss J on United Flight 175.

Flight 11 crashed into the north tower of the World Trade Center, followed by Flight 175's collision with the south tower, minutes later.

As USA Today noted, "Ruth Clifford McCourt and Paige Farley Hackel were inseparable in life. Tuesday, in a fluke of airline ticketing, they became inseparable in death."


Family, friends, supporters and loved ones have not allowed Paige's untimely death to derail her passions. They've established the Paige Farley Hackel Free Care Fund, which provides addiction treatment at no cost to those most in need. In 2007, the Paige Farley Hackel Memorial Playground was dedicated at the Salvation Army Children's Learning Center in Dorchester, Massachusetts.

In my research on Paige Farley-Hackel, one of the most profound and all-encompassing statements was what she wrote in her 1973 yearbook:

There is no duty we so much underrate as the duty of being happy. 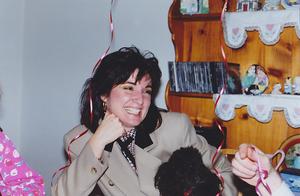 Paige knew changing lives begins with changing oneself. She bettered herself to better the world. I am proud to remember Paige. Please say a prayer for her family and those she loved so dearly.


This tribute is part of Project 2,996, a cooperative online effort to keep alive the memories of the 2,996 victims of the 9/11/01 tragedy. See other participants, and their tributes to those lost, here.

Blurted by Christina-Marie Wright at 8:30 AM