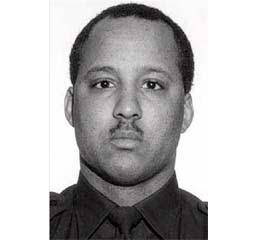 This tribute is respectfully reposted from September 11, 2010.

Andre G. Fletcher was a 37-year-old firefighter with Rescue 5, an emergency response unit with NYFD. Andre and his twin brother, Zack, also a firefighter, responded to the crisis on September 11, 2001. Andre was killed in the first tower collapse at the World Trade Center.

Zack described he and his brother as "type A-plus" personalities, thriving on action, adventure, danger and excitement. The brothers last spoke as Andre raced toward the burning towers. Zack told him he'd be there soon, to work alongside him, and not to do anything stupid - "Don't be a hero," he told his brother.

But Andre Fletcher was a hero, through and through. And he was a man of action. When he joined the fire department in 1994 and learned they didn't have a baseball team, he started one. He played on the department football team. I imagine him playing catch with his son, Blair, 12 years old in 2001.

I imagine, when Andre arrived on the scene at the World Trade Center, he never had a second thought about being a hero. It seemed to be what came naturally to him, and that, quite simply, is how I imagine him; a hero in death - and in life.

Say a prayer for Zack, who must certainly feel the loss of his twin each day. For Andre's parents, Lunsford and Monica, Jamaican immigrants who must be incredibly proud of their sons, but mourn the loss of one of the twins. For Blair, who lost a father at that all-important time of adolescence when a boy needs his father's guidance and patience. Say a prayer for the memory of Andre G. Fletcher, killed in the line of duty, doing what he lived for.

This tribute is part of Project 2,996, a cooperative online effort to keep alive the memories of the 2,996 victims of the 9/11/01 tragedy. See other participants, and their tributes to those lost, here.

Blurted by Christina-Marie Wright at 8:30 AM