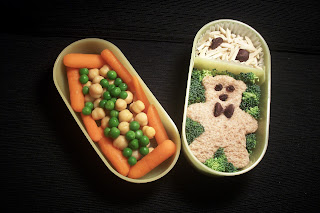 I'm cross-posting this from Sexy Vegan Mama, because it's simple enough that anyone can do it, and cute enough to share!

Let's make one thing clear... I'm NOT one of those crafty moms who scrapbooks, decorates my house for every season, turns vintage suitcases into shabby chic conversation pieces, or makes masterpieces of boxed lunches.

What I AM is a mama who's always looking for fun, easy ways to get food into my kids' bodies, while acknowledging our entire family's hodgepodge of food restrictions:

I'm vegan, Pepper has digestive issues (we're still working on identifying those -- she's heading toward a referral to a GI specialist), Curlytop and Snugglebug are allergic to Red Dye 40, and poor little Snugglebug can't have fruit if it's juiced or dried due to the change in sugar concentration.

(Oh, by the way, please go VOTE for this blog in the Circle of Moms Top 25 Food Allergy Mom blog contest! Sexy Vegan Mama was a late nomination, and there are only a few days left of the contest, so I have a lot of catching up to do! You can vote once every 24 hours. Thank you!)

I also don't have a ton of time on my hands, so when I see those crafty moms cranking out cute-as-a-button bentos, I'm absolutely floored that anyone, anyone would spend so much time creating a meal that's going to roll around in a backpack for a few hours before its precious owner gets around to eating it.

Still, there's something to be said for a cute lunch when you're a pigtailed princess in kindergarten or the first grade... So I made a quickie little bento that's so simple, even a caveman mom of seven can do it. 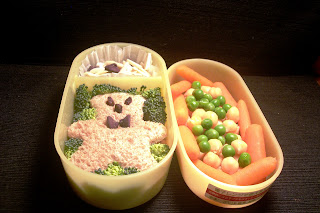 About the bento boxes -- I picked them up in a Tokyo hotel gift shop, and I'm sure I paid too many Yen for them, but they're adorable, and they've held up well over the past couple years, with just a bit of scratching to the adornment on the top lid. I haven't found the exact same ones online yet, but these are similar in design, except they include a spoon, rather than chopsticks. Plus, they're less than ten bucks. Woohoo!

(Read about my adventures in Japan here.) 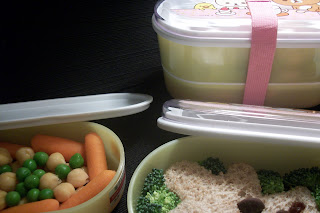 They have a shallow tray on the bottom with a lid that fits snugly inside the edges, then a deeper tray on top, with removable partitions and a snug-fitting lid. On top of all of it is a clear, shallow, hard plastic top which creates a storage area for small plastic chopsticks (included in the set) or other tiny utensils. (I'm fond of keeping and reusing for lunches the diminutive plastic forks which come in Simply Asia's Sesame Teriyaki noodle bowls (they're vegan!), which I pack when I'm traveling to places where I'll be cooped up in a hotel room or where vegan options are hopeful, at best.) 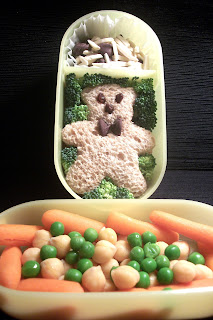 Anyway, to make this bento, I: 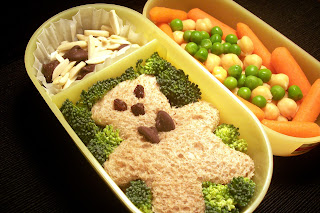 That's it! Is that the simplest bento ever, or what?! 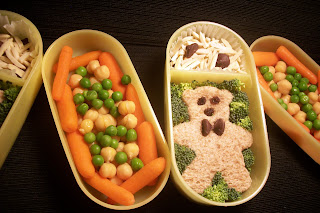 Blurted by Christina-Marie Wright at 10:24 AM