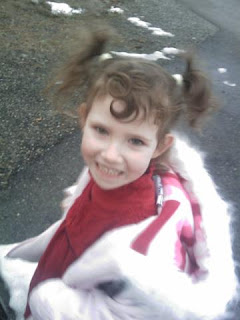 I don’t know what I’d do without Curlytop and Snugglebug. They always have an explanation for things which might otherwise confound the world.

When reminded they can’t play outside alone, my faith-filled girls assure me, “It’s okay, Mama. God is with me.” Um, no. I follow too many missing children cases to let my little ones wander beyond the front door without the watchful eye of a Trusted Big Person.

Interestingly, inside the house, those same girls won’t even go to the bathroom alone, never mind pick up their room without an adult hovering over them. The tune quickly changes to, “I need you to come with me! God isn’t with me—I can’t feel him!” Now, I’m not a theologian, but I suspect my wee philosophers are simply seeking my attention.

My insistence that certain activities are for grown-ups only has finally sunk in, ensuring Curlytop and Snugglebug understand there are just some things that can’t be tackled until they’re older. Driving, for example. In fact, the girls are so accepting of the concept they’ve decided to selectively apply it to other activities, as well. The other day, I tried to coax Curlytop into trying a new dish. “I’ll do it later, Mama,” she said. “Like, when I’m a grown-up.”

Our mild and sweetly aging family dog, Perseus, went missing the other day. For the record, he’s never lived up to the image of his adventuring, battling namesake. He’s what we call a “watch dog.” In the event of a burglary, Perseus would assuredly “watch” the perp haul off the stereo, the television, the computer…

Anyway, we searched and searched for our loyal canine, calling and whistling for him outside, walking through the house to scout where he may be hiding. A minute short of calling Animal Control, fearing he’d wandered off, I walked into Curlytop and Snugglebug’s bedroom. They both looked completely angelic and nonchalant, watching a video. Too angelic, in fact. “Girls, have you seen Perseus?” I asked. They glanced at one another before answering, in unison, “No, Mama.”

I turned to leave, and heard a muffled scratching sound. “What’s that noise?” I asked. Curlytop and Snugglebug both shrugged their shoulders, turning their attention back to the movie. As the scratching grew more urgent, I followed the sound to the closet. I turned the knob, pulled the door open, and struggled to keep my footing as Perseus burst out, nearly knocking me over.

“How did Perseus get in the closet?” I demanded.

Curlytop shrugged her shoulders again, but Snugglebug cleared up any speculation with a wide-eyed explanation of astonishment. “It must be magic! Perseus is a magician! Isn’t that cool, Mama?”

Cool, indeed. I must be the only pet owner in the world with a magical dog who not only disappears himself, but also traps himself in closets.

Speaking of pets, Mr. Wright recently “fished” a piece of chewing gum out of our aquarium. The reason the gum ended up at the bottom of the tank? “Fish love to blow bubbles.”


Blurted by Christina-Marie Wright at 10:18 AM