The Unhappiest Place on Earth and Other Vacation Tales

For children with Sensory Processing Disorder (SPD), Disneyland may not be the carefree wonderland promoters would have parents believe. In fact, for some SPD kids, it may be something closer to one giant house of horrors.

We weren’t thinking about that when we forked over a month’s worth of grocery money at the hallowed gates of the theme park. We were thinking about the memories we were creating with our children.

I’ll never forget Curlytop and Snugglebug screaming in terror at the sweet face of the wooden puppet who came to life during a gently ambling journey through a darkened ride which featured a blissfully beautiful good fairy and a kindly old man. Snugglebug reviewed the Pinocchio ride with carefully-crafted restraint. “It was scary, and I hated it.”

Next up was a ride so sweet and mild, adults dread it and children adore it. After all, it really is a small, small world, and if the syrupy song doesn’t give you a toothache, the angelic faces of children from around the globe certainly will.

Unfortunately, our mid-November visit meant the ride was outfitted for Christmas, and played not only that most-dreaded song but a Christmas carol in alternating blasts—and sometimes in tandem. The usually charming children were all but hidden behind blinking, glimmering, aggressively-featured holiday decorations. Add all that visual and audio busyness to chilling blasts of air to simulate snowfall, and it’s the perfect recipe for SPD meltdowns.

Oh, yes. We were “that family” on the Small World ride. The family with the shrieking kid who just won’t shut up? That’s us.

I got Curlytop to agree to board a carousel—on the condition that we’d sit on a bench, not a moving horse—only to have her burst into tears as the music started, resulting in an emergency disembarkation.

The crowds, smells, larger-than-life cartoon characters, noise, lights and general chaos of Disneyland must have felt like the equivalent of a straight-to-video horror flick for my girls. I’m ashamed to say I drank the Disney kool-aid, and never considered my children would be anything but thrilled to see Mickey’s stomping grounds.

The next day of our vacation was exceptional, by comparison. We hit Knott’s Berry Farm, with its old-school, carnival-type rides and games. The park lacks the hologram-filled adventure rides of Disneyland, but Curlytop and Snugglebug loved “driving” race cars and semi-trucks around a tiny track without sensory assault, and were perfectly content to hang at Camp Snoopy for hours. 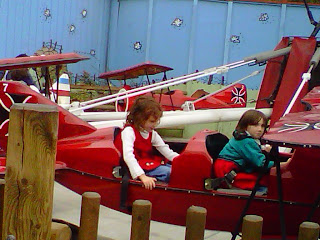 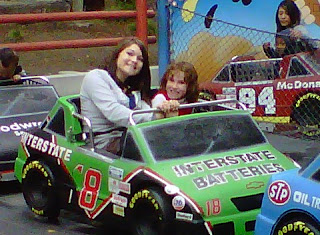 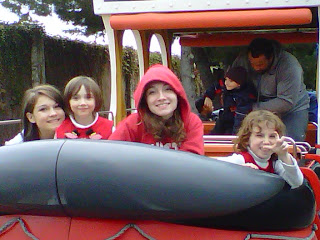 Plus? It’s half the price of Disneyland.

While the little girls played with Mr. Wright, the older girls and I embarked on a quest to ride every rollercoaster in the park. While Princess loves a good ‘coaster, she’s a bit more selective than the rest of us—no vertical drops, and no rocket launches.

That put her on snack patrol with Curlytop and Snugglebug, while Mr. Wright begrudgingly agreed to be my seatmate while Pepper rode with GirlWonder on the Xcelerator—a ‘coaster which starts like a pinball machine, pulling the car back, then launching it at 82 miles per hour in 2.3 seconds to a height of 205 feet, then drops essentially straight down before hitting two overbanked turns and gliding to a stop. To top it off, it’s pink. It looks for all the world like the Barbie Dream ‘Coaster—not an encouraging thought.

It was amazing, and no one soiled their pants.

The coup de grâce was the notorious GhostRider wooden rollercoaster, which my fellow junkies and I waited two hours in line to board, due to a sudden cloudburst. Apparently, the ride can’t be run in the rain and, while we love a good shot of adrenaline, we’re more than happy to leave such judgments to the professionals. We’d like to stay on the track, and make it to the end in one piece, thank you very much.

It was dark by the time we finally boarded our car. Riding the rails in the dark made the experience even more exhilarating, and sealed our status as Knott’s devotees.

The drive back home to Washington featured a near-brawl in a supermarket parking lot, a highway flooded with spilled port-a-potties, sing-a-longs to Fleetwood Mac, carsickness, drive-thrus, and 1,100 miles of memories I wouldn’t trade for a month of Disney.

Eat your heart out, Mickey… The happiest place on earth is where is my family is.


Blurted by Christina-Marie Wright at 10:11 AM