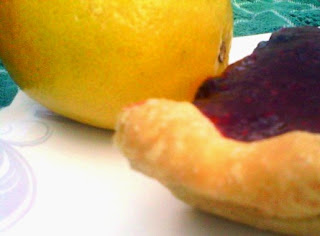 Determined, I pushed my cart through the aisles of the grocery store, on a mission. Two tubs of vegan cream cheese, a bag of vegan sugar and some raspberries stood in the way of my night of baking.

What did you just ask? Sugar isn’t vegan?

Most of the white stuff that passes for sugar isn’t vegan. Most granulated white cane sugar in the United States is refined with bone char, a granular material made—appropriately enough—by charring animal bones.

Much like me, my sweetener is unrefined. I use evaporated cane juice crystals in place of white sugar and brown sugar (most of which is actually white sugar, with molasses added back in), and I don’t adjust the measure. I simply substitute teaspoon for teaspoon, cup for cup.

I didn’t want to spend a lot of time in the grocery. I’d had a busy, exhausting day which began with a dramatic scene, starring Curlytop and Snugglebug, with spotlights on dueling tantrums over which would get the last elephant-shaped vitamin, and which would be left with the stupid tiger. As is our schedule this summer, I herded them onto the patio so they could be in the pool before 8:30 a.m. and splashing my netbook as I work on the cookbook I’m co-authoring with international bestselling author William Maltese.

Did I mention I’m way behind schedule on my part of the book?

Shortly after I signed the glowing, heralded publishing contract, I took on yet another job — as a sexual health consultant and distributor of “bedroom accessories.” I don’t mean knickknacks to put on your nightstand; more like things to knock your knickers off.

In addition to forming a new business, I lost over a month of kitchen time when we moved, mostly because my brain turned to gelatin (also not vegan) as a feeble defense mechanism in response to the stress involved in moving a household of nine people, three dogs, a cat, and a hundred-gallon fish tank with an unknown number of fish.

Did I mention I was obsessing?

Not until I was away from my keyboard, children, husband and kitchen—and into the crowded grocery—did I realize I’d missed another, more immediate, deadline: the one for my Gonzo Mama column.

I hadn’t missed it by much. Not really. Well, maybe a bit more than usual. Okay, I was over nine hours late when I texted Mr. Editor, explaining my presence at the grocery store, and my preoccupation with what I imagined would be the greatest thing to ever come out of my oven. Or maybe the greatest since last week’s cheesecake.

Somehow, I don’t think he was impressed.

Mr. Editor either isn’t allowed to eat pie, or he has steel-plated willpower, because I never see him eat anything sweet. Dear readers, you may be impressed, however. Here’s the recipe:

Combine filling ingredients in a blender or food processor. Pour into pie shell and bake 45-50 minutes, or until top just begins to take on a golden hue, and the crust begins to brown.

Place baked pie on a cooling rack and allow to cool.

Prepare topping by combining cane juice crystals or sugar with cornstarch in a medium saucepan. Gradually stir in water and chopped raspberries and cook over medium heat, stirring constantly, until mixture begins to thicken. Bring to a boil and boil for one full minute while continuing to stir constantly to prevent burning. Remove from heat.

Place whole raspberries evenly over top of pie (it's okay if a few break), then pour raspberry sauce over entire top of pie, spreading evenly. 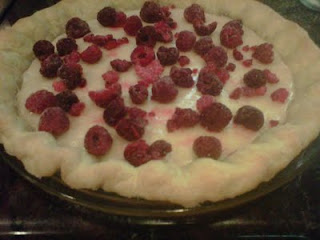 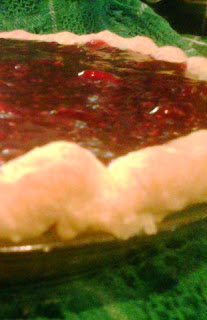 Refrigerate pie for four hours before serving—if you can wait that long—and enjoy! 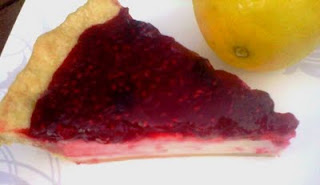 I did mention the cookbook is not intended as a weight-loss guide, right?

Blurted by Christina-Marie Wright at 1:39 PM