Naïveté at the Nativity - Revisited

This is one of my favorite holiday posts, because it demonstrates so perfectly the dynamics of my family. In fact, it may just become an annual post. Enjoy, and please feel free to share your holiday program mishaps... You know, so I don't feel so dysfunctional and whatnot. 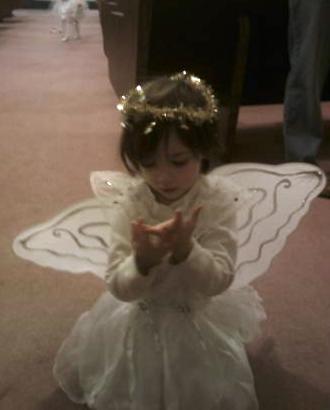 My kids make up eighty percent of the children and youth in our church, so there’s little question that they will be cast in the Christmas production each year. The competition for roles is—what’s the word I’m looking for? Oh, yes… “nonexistent.” In fact, it’s not unusual for a single child to play two or thirteen different roles in each year’s program.

In 2006, a three-month-old Snugglebug made her stage debut as baby Jesus. During rehearsals, we’d placed her in the wooden manger (filled with shredded paper instead of hay, due to her asthma) several times so that she wouldn’t be startled by the sensation. There was some discussion of a song that would be sung during the manger scene, but we never ran the scene with the music. Our director said things like, “This is where everyone is gathered around baby Jesus in the manger. Is the baby in the manger? Okay. Now, there will be music here, so everyone will just be still and look at the baby, okay? Okay! When the music is over, the curtains will close, and the baby can come out of the manger.”

We actually didn’t hear the music until the performance. Mr. Wright and I were backstage, assisting with costume changes. There were many. Shepherds became angels who became sheep who became shepherds, and so on. Snugglebug was napping in her infant carrier, and I held out hope that she’d stay that way through her big scene. Naturally, just before her cue, she woke up, hungry and fussy.

A volley of urgent whispering took place behind the drawn curtain, with Princess (“Mary”) asking, “What do I do? She’s crying. I can’t take her out there while she’s crying,” and me thrusting a bottle into her hand and directing her to “wing it.”

Nestled into the manger with Princess holding the bottle for her, Snugglebug calmed down, and no one even brought up the anachronistic use of the plastic bottle that fed the infant savior. Then, the song started. It was “What Child is This?” With two verses down and just the slightest discontent stirrings from Snugglebug, I thought we were in the clear. I prepared for the curtain to close, planning to whisk her offstage before she let loose with any serious wailing, but the music went on. And on. There must be thirty-seven verses of “What Child is This?” that I have never heard.

Snugglebug began making the small whimpering sound I recognized as the prelude to full-volume, fist-clenching, rage-filled screaming. Mr. Wright heard it, too. We looked at each other. “What do we do?” we mouthed.

As luck would have it, I married a genius. Mr. Wright grabbed a pair of donkey ears from the pile of costume accessories, put them on, and entered the stage. What’s one more donkey, in a manger scene?

It did raise a few eyebrows when the large donkey stole the baby Jesus from the manger, but I’m sure the wisemen would have called in an Amber Alert if they truly thought there was cause for alarm.

This year, Curlytop and Snugglebug couldn’t wait for their cue to enter as angels and followed “Joseph” and “Mary” on the road to Jerusalem. “Oh, look!” a chuckling Joseph ad-libbed. “The Lord has sent guardian angels to watch over us on our journey. God is so good!”

The unscripted guardian angels appeared in several scenes, including the manger scene. When Snugglebug saw her Cabbage Patch doll resting in the wooden trough, she shouted, “That’s not baby Jesus!” over the playing of “Mary Did You Know?” With haste, our precious cherub yanked the doll from the manger and tossed it across the stage.

Taking note of the empty manger, Curlytop pulled off her wings and crawled inside. “I’m not baby Jesus,” she announced to those who may have been confused. “I’m not an angel now. I’m a little girl. I’m gonna use the baby Jesus bed, okay?”

In fact, the only scene Curlytop and Snugglebug didn’t participate in was the Choir of Angels scene they were cast in. Instead, they ran, screaming, down the aisles of the church. It’s tough raising divas.

Call me naïve. Call me an optimist. Call me out of touch with reality. The fact is, the church Christmas program only happens once a year. That means I have ample time to forget everything that went wrong with the previous year’s program, and get excited about the current year’s performance.

Merry Christmas, and may the Lord richly bless you in the coming year!

Blurted by Christina-Marie Wright at 8:17 AM