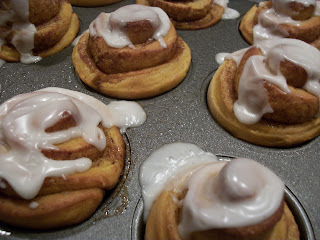 My family loves cinnamon rolls, but I think they're sort of... *yawn.* When I was shopping for ingredients for my pumpkin pie, I picked up a 30-ounce can of pumpkin pie filling instead of a 15-ounce can, like the recipe called for, because it was cheaper. I figured I'd think of something to do with the other 15 ounces.

What I ended up with is nothing short of a miraculous revamping of the same-old cinnamon rolls.

Blend until smooth or desired consistency:

In a small bowl, sprinkle yeast over water and allow to dissolve. Add oil and pumpkin, mix thoroughly.

In a large bowl, combine and mix flour, salt and sugar. Make a “well” in the middle of the dry mixture, then add liquid mixture. (See photos of this well/liquid thing if you don't get what I'm saying, here.) Stir liquid into flour until it’s too stiff to stir with a spoon, then oil your hands and knead the dough.

Add a little more flour or water if necessary to achieve desired consistency. Dough should be slightly sticky, but not totally clinging to hands or bowl. When dough forms easily into a ball, remove from bowl, put about a teaspoon of oil into the bottom of the bowl, and roll the ball of dough in the oil to coat it. 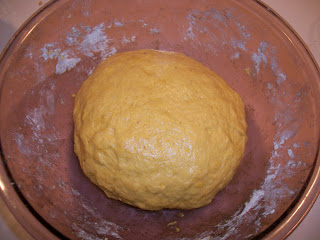 Allow to rise until doubled in size – about an hour.

Punch the dough down, divide in half and roll out on a floured board into two large rectangles – about 15” x 9”. Spread a layer of softened margarine over each rectangle. 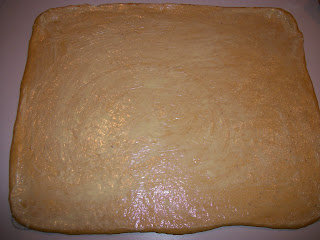 Mix sugar and cinnamon, then sprinkle over buttered rectangles. 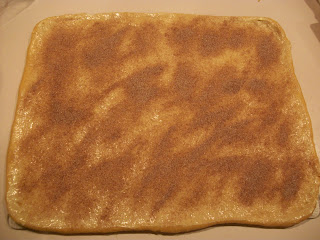 Starting at the wide end, roll the dough tightly into a long roll. 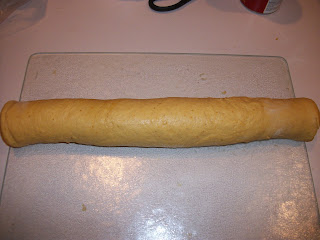 Slice, using a serrated knife, into 12 rolls. Place the rolls into oiled muffin tins and let rise for about 20 minutes. 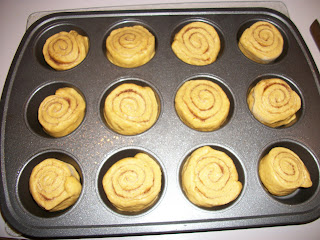 Bake until golden brown on top, about 20 to 30 minutes.

Top with glaze while warm.

Blurted by Christina-Marie Wright at 8:16 PM