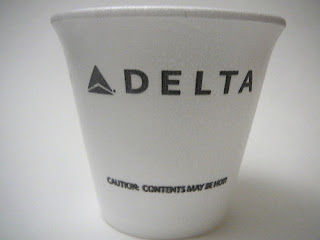 Nothing satisfies me more than things working out splendidly after they go horribly wrong. Take our recent flight to Baltimore, for example.

Mr. Wright accidentally booked me on a flight precisely 24 hours before his. When he realized his mistake, he tried to rebook through Delta’s call center. We figured if the cost of changing was lower than putting me up in a discount hotel for a night, we’d do it. Sadly, it was not to be so. Mr. Wright loaded my carry-on into the car and set off on what would be the first of two trips to the airport for him.

In the car, I used my netbook to check in online and was virtually assaulted with Delta’s invitations to try “mobile ticketing,” which promised to save all sorts of time at the airport by sending my boarding pass to my smartphone. Always a fan of better living through technology, I decided to try it.

We arrived at the airport early, in spite of my attempts to postpone our arrival with requests for Starbucks stops and just as many for potty stops. Unfamiliar and ill-at-ease with the experience of arriving early for a flight, I decided to burn the calories I’d normally expend racing to my gate in a different manner; I made out with my husband in the backseat of our car.

It was still an hour before my flight when we approached the Delta counter and tried one more time to rebook. Sometimes, those counter people are sympathetic and let you rebook for fifty dollars if you, say, forget your asthma inhaler and have to go home to get it, which is the angle we took. No luck.

“Lemme use your computer. I need to book your room in Baltimore.” Have I mentioned Mr. Wright’s thriftiness? He wasn’t about to give up before he found the absolute, none-lower, rock-bottom, cheapest room. “I’ll give up the limo if you don’t send me to some rat-infested alley motel,” I begged. “And my flight boards in thirty minutes. Hurry up.”

But Mr. Wright did not hurry. That’s how, fifteen minutes before my flight boarded, I found myself as the only person in the security line, and without my sunglasses, which I’d taken off my head in the car before hopping into the backseat.


I can’t live without my sunglasses. My eyes are very sensitive to light. Sure, it was the middle of the night, but it would be daylight when I landed, and then what would I do? Mr. Wright hadn’t made good on the envelope of cash to go shopping, and how could I even find a sunglasses store when I’d be blinded by the sun’s harsh glare?

Mr. Wright made record time retrieving them. I had five minutes until my flight boarded, which meant fifteen until they locked the door. I was still the only one in the security line. I could make it. I kissed Mr. Wright and trotted up to the TSA agent and showed him my mobile boarding pass.

Delta failed to mention their mobile ticketing image may not be properly sized on some devices. The image Delta sent me was refused by TSA! I was sent to the Delta counter for paper tickets.

I ran – in my socks (I’d removed my shoes for security) – to Delta, skidding to a halt when I saw not a soul was there. It was two minutes until my flight boarded. I called out and waited for someone to help me, but no one came.

I raced down the escalator to Delta’s baggage claim area, where hoards of people waited in the “lost baggage” office – a ringing endorsement of Delta’s service, to be sure. “TSA won’t take my mobile ticketing, my flight is boarding, I don’t have paper tickets, no one is at the counter upstairs, and I need help!” I cried over the complaints.

One of the women behind the counter glanced at the clock and said, “Yeah. You’re not going to get on. Go sit out there on the baggage carousel and wait for someone.”

Well, I called Mr. Wright and cried and made him come back to yell at those Delta ladies until they rebooked me – without a fee – on his flight. Then, he called Delta’s national customer service and yelled at those people until they gave me 2500 frequent flier miles. After all, it was Delta’s bad mobile ticketing image that made me miss my flight, right? Finally, he was able to cancel the reservation for the Baltimore hotel room, saving enough money to buy me a sandwich.

The moral of the story, of course, is:

Don’t make out with your husband in the airport parking lot if he is thrifty and you have sensitive eyes and you’re trusting Delta’s technology.

Blurted by Christina-Marie Wright at 1:00 PM