“My Dad has a Yacht of Girls” 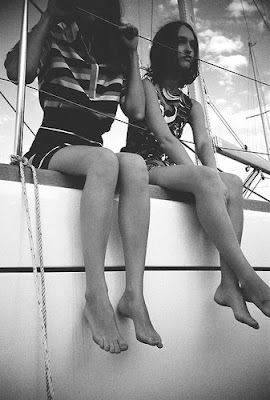 Curlytop and Snugglebug have made great strides in their language development since we first consulted with a speech therapist over three years ago. Still, there are some words they use which can only be understood by family; and Curlytop still serves as a Snugglebug-to-English translator all too often.

Music Store Bob’s wife, Brenda, watched the girls one night while Waterdog, the band featuring Bob and Mr. Wright, played a local venue. She commented on the girls’ speech patterns, likening it to “twin speak.” Even though Curlytop and Snugglebug are thirteen months apart, they function pretty much like twins, and they do appear to have words that they use exclusively with one another. This phenomenon of secret or made-up language is called “idioglossia.” When it occurs in twins, it’s known as “cryptophasia.”

Some of their speech, though, is just difficult to understand. They’re speaking English, but the average listener can’t decipher it. Since I’m their mom, I consider myself to be an above average listener, and I’m often able to simultaneously translate for the listener as the words come out of my girls’ mouths.

For example, “chex monks” are not cereal friars, but chipmunks. “Hizzards” are scissors, but the singular form, “hizzard” is a lizard. A “jam witch” is a sandwich, whether or not it’s made with jam (which is actually “jwelly”); though it’s often made with “pea gut bunner.”

A “cow; oaty” is obviously a coyote, and “a yacht” is simply a phrase meaning many; a lot. Therefore, the statement “My dad has a yacht of girls” really just refers to his five daughters, who don’t even come close to filling up a yacht – not that we have one to fill, anyway.

Then, too, are the words that are spoken plainly, but signify something other than their original meaning. A “princess” is a dress, no matter the royal status or title of the young lady wearing it. “Cow,” not to be confused with “cow; oaty,” refers to beef or anything resembling it and intended for consumption. A “wiggle” is any skirt that provides a beautiful swish when the wearer wiggles her groove thang, and “break-uh-ull” (breakable) refers to anything they aren’t allowed to touch.

Okay, maybe that last one is my fault.

I’ve provided my little ones with many terms that have become commonplace in their language, such as “coffee,” which indicates any beverage Mommy is allowed to drink but they aren’t (I thought “Southern Comfort” a little too formal) and “working,” which is anything Mommy is doing at the computer that she doesn’t want interrupted.

Because, you know, “Facebook” is a pretty complex concept to explain to a preschooler.

Blurted by Christina-Marie Wright at 9:53 AM