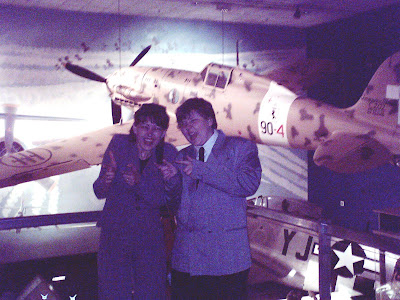 I spent the summer of 1994 in the library at Fairchild Air Force Base, where Pockets's dad was stationed, because I was 19 years old, enormously pregnant, and on a quest to read every book on pregnancy and childbirth that the United States military saw fit to stack on its shelves.

Plus, the library was air-conditioned.

I read about preterm births. I read about birth defects. I taught myself Lamaze. I read What to Expect When You're Expecting enough times to not expect anything at all, and Birth After Cesarean - even though I knew I'd never be pregnant again, no matter how the kid came out. Some of the books were downright terrifying, with entire chapters written solely to keep me awake at night, worrying myself into a case of hemorrhoids. Those were the "syndrome" chapters. Down's Syndrome. Fragile X Syndrome. Sudden Infant Death Syndrome. Floppy Infant Syndrome...

One night, Pockets's dad came home to find his wife, curled around her beachball of a stomach, sobbing. "What if the baby is autistic?" I hiccupped through tears.

"Even worse," he countered, "what if the baby is artistic?"

My list of worries was long, and included:
Pockets's dad disconnected the television and revoked my library card.

Pockets was born, albeit nearly a month late, without complications. He was a beautiful, fully-formed newborn with a healthy scream and a nonstop appetite. I've been smothering him ever since.

Perhaps it's the result of having a worrier for a mom, but Pockets has not, traditionally, been a brave child. Maybe hearing "What if you get hurt?" "Don't touch that - you don't know where it's been!" and "Don't let anyone steal you!" over and over again during his formative years made him overly cautious.

Then again, this is a kid who held out for three and a half weeks past my due date to venture into the world, so maybe Nature wins over Nurture in this particular case. Suffice it to say Pockets has not been the most fearless child I've ever known.

He entered kindergarten a full year early with a tested vocabulary of twelve and a half years. Although he easily held his own academically, he was younger and smaller than the kids in his social circle, and I began to wonder if I'd made the right decision in petitioning for his early entry to school.

When he played on his first tee-ball team, his age and lack of physical maturity showed. The other kids had an entire year of running, throwing and catching on him, and some of the kids had athletically gifted parents who pitched balls to them in the backyard, elevating them to mini Ichiros who didn't need no stinkin' tee when batting. 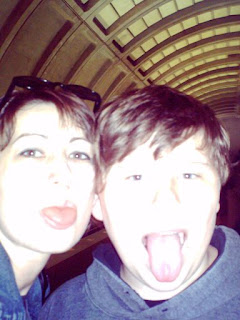 Poor Pockets. He had a mom whose greatest athletic ability was running up and down the stairs of the restaurant she waited tables at, and - on a good day - not falling on her face.

He was such a beautiful, strange child; sensitive and creative, slight and undeveloped.

My first lesson in letting my kid grow wings and risk falling came during a teeball matchup with a team of steroid-injected first-graders (THEIR moms clearly let them drink the bovine growth hormone milk) coached by a Lou Piniella clone. "My kids don't use a tee," he scoffed, "but if your kids want to, we won't object."

Twelve little first-grade heads huddled with their coach - Pockets included. "Our kids won't use a tee either," announced our coach.

"Are you sure?" I cried. I pulled Pockets aside. "Honey, I know you've never hit a pitch before, and I don't want you to feel pressured. The name of this game is teeball, and if you want to use the tee, you needn't be embarrassed."

Pockets shook his head. "Mom, I can do this."

I held my breath as he got up to bat. The coach pitched the ball. Pockets swung, and missed. Another pitch; another miss. As the third pitch was released, I prepared my best "Good try, Pockets!" as he swung... and made contact. 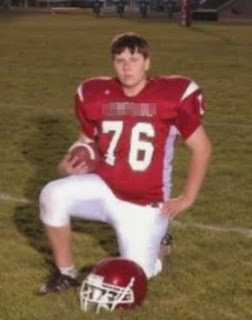 This year, Pockets earned his first football letter, along with his team's Most Improved award. He turned out for track this spring, even though Driver's Ed got him up at 5:30 every morning. Then, he came home a few weeks ago and announced he's going to enroll in college next year, weeks before his 16th birthday.

"What about football?" I asked. "What about track? You'll need to be preparing for the SATs pretty soon, and..."

And really, I know he can.


I dropped Pockets off this morning to take his placement tests for Running Start. If all goes well, he'll be entering college at the same time he begins his junior year of high school.
Today, I am grateful for a kid who, in spite of having a mother who eats What If for breakfast and washes it down with a double shot of I'm Not So Sure About That, has become fearless.


What are YOU grateful for today?

Photos:
1) Pockets and Mama gun down bogeys at the National Air and Space Museum - armed and dangerous (and our fingers are loaded, too!)
2) The dynamic duo goofs off in a Metro tunnel
3) Pockets, in football mode (c) Parson's Photography


Blurted by Christina-Marie Wright at 4:05 PM