The Princess and the Frog Rescuer 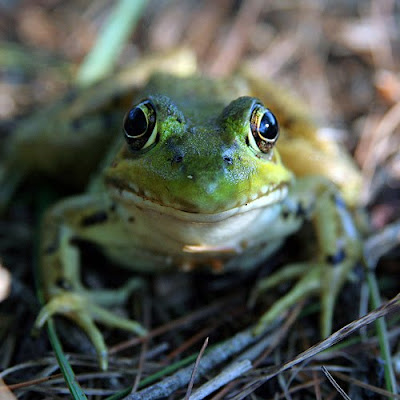 Being married to an animal rights hobbyist takes its toll on a hunter like Mr. Wright. I’d go so far as to say it serves to make him the subject of abject ridicule among the gun-toting Bambi stalkers who used to invite him on weekend outings.

I say “used to” because many of Mr. Wright’s hunting buddies suspect – perhaps with good reason – that he may, at any time, endeavor to liberate the prey.

In San Francisco, I found myself in tears while visiting a waterfront vendor, shocked by the boxes filled with crabs stacked one upon the other; fifty to a box. “Look at all those poor, dead crabs,” I said.

“They’re not dead,” Mr. Wright corrected. Sure enough, the shelled creatures were pinching and waving their arms in a futile attempt at escape. The person ahead of us pointed to a plump crustacean and the vendor plucked it from the box, tossed (tossed!) it on the scale, backside down, then plopped it into a pot of boiling water.

“Noooooo!” I shrieked. The vendor, alarmed, asked, “Was it the wrong one?”

“No, I want to save a crab.” I used that tone that tells Mr. Wright I mean business – if you can call saving animals a business. “You’ve got to be kidd—” he began, but knew it was useless.

I selected my crab – one of the small ones at nearly the bottom of the box. Surely, he was young and had a full life ahead of him! Besides, hadn’t he been through enough, being on the bottom of a box? 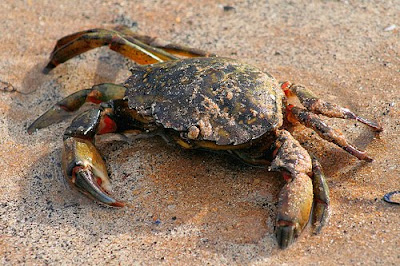 We headed for the wharf and quickly realized that throwing a crab from the dock’s elevation would serve only to shatter his shell on impact, thus voiding any good intentions. I began calling over the dock’s edge to boatmen. “Say, I’ve got this crab, here, and he’s away from home. Could you help me out by motoring him out a bit and letting him go in the water?”

As I parted ways with the third boatman to get a crazed look in his eye, while licking his lips and drawing a pot full of water, I saw Mr. Wright, climbing down an access ladder to the water, crab in hand. He reached the bottom, gently set my friend free, and began ascending the ladder.

By the time he reached the top, I was in tears. “What’s wrong?” he asked. “I let him go. I did what you wanted. Do you realize I just paid ten dollars a pound for something I risked falling into the water to set free?”

Recently, Mr. Wright and I were driving home through a certain community on a golf course after dark. Suddenly, he brought the car to an abrupt halt. There, in the headlights, was a frog. Never one to needlessly kill a critter, my husband got out of the car, picked up the frog, and carried him to the grassy median.

“That was sweet,” I said as he got back behind the wheel and put the car into gear. We didn’t make fifty feet of progress before he stopped again.

Switching on the high beams, we saw the entire roadway, dotted with ribbiting revelers of the night. “Maybe you’d better drive,” he said.

I got behind the wheel and inched the car along as Mr. Wright rescued frog after leaping frog from certain doom beneath a set of Goodyears. All told, at least twenty found themselves in the cool, moist grass covered in evening dew.

As he climbed back into the car, my dear husband said, “You know, I really hope those frogs weren’t in the road because the grass was recently sprayed with lye. I hope I didn’t just send them back to third degree chemical burns.”

Well, at least we didn’t shatter the crab.