Somebody is Always Broken or Bleeding 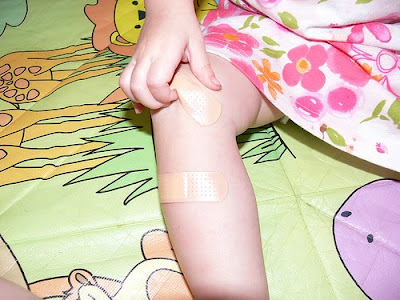 Last night I cut my finger while slicing a loaf of bread. It’s not an unusual event. In fact, I fillet myself quite frequently. If Mr. Wright had his way, my kitchen tools would be pared down to rolling pins and spoons, though I frequently manage to find a way to injure myself with those, as well.

I quickly wrapped a paper towel around my bloody digit and set off in search of an adhesive bandage. An hour later, I gave up the search for the elusive bandage. The bleeding had pretty much stopped by then, anyway.

There are few things I can count on in my chaotic life, but there are two facts I’ve come to accept as the noble truths of The Gonzo Mama’s world. The first is that I’ll never find an adhesive bandage when I cut myself. The second is that if one of our kids is going to get hurt, it’s going to be on my watch.

Sure, there have been rare exceptions. Pockets was hit by a car in a crosswalk during a visit with my ex-husband. Curlytop was bit by a dog and Mr. Wright had to spend the night with her in the hospital while she received intravenous antibiotics while I was out of town making the cake for my friend’s 50th birthday party. The Dude cracked his collarbone while sledding with friends.

Still, the majority of the blood and busted bones occur when I’m the only adult in the house.

I have an almost pathological fear of blood and broken body parts. I was the first student in my school district to challenge the dissection requirement in sophomore Biology. At the time, I cited my vegetarian and animal rights principles, but the truth was much simpler. I just can’t stand the sight of blood, incisions or anatomical parts not being where they are supposed to be.

When Pepper executed a poorly-landed flip on the bars at the park and broke her nose, there was a lot of blood. I mean, slasher film amounts of blood; buckets of it. Somehow, I hadn’t properly planned for a broken nose when packing the car for our outing to the park. All I could offer poor Pepper en route to the emergency room was a handful of Taco Bell napkins and a very dirty beach towel.

Luckily for us – and those unfortunate enough to be traveling on the roads that day – I only had to drive about six blocks with the radio drowning out the sound of hysterical shrieking.

When we burst through the doors of the ER, the staff responded in a rapid, practiced manner. “Let’s get that kid into the back for some x-rays, and for the love of God, give the mom a sedative!”

GirlWonder’s name might imply that she has superpowers. I’m not denying that she does. Flying just doesn’t happen to be one of them. When GirlWonder was seven, she fell out of the neighbors’ tree house, compound fracturing her arm. She ran home, holding her grotesquely disfigured arm in front of her. (Insert Sesame Street™ closing line: “Today’s arm is brought to you by the letter Z!”)

Something about broken bones triggers my gag reflex like nothing else. It’s hard to convince a child that everything is going to be okay when you’re alternately dry-heaving and screaming like a banshee.

The ER visit was short, and revealed that GirlWonder would need immediate surgery. The doctor summoned the anesthesiologist. “When you’re done with the mom,” the ER doc suggested, “why don’t you stick around and put the kid out for surgery?”

Curlytop has more nosebleeds than a boxer with a bad block, but the little dickens only gets them when Daddy is gone. I’m starting to develop a conspiracy theory.

The problem is, we never have minor injuries. If my family is going to get hurt, they’re going to warrant inhuman amounts of direct pressure, an emergency room visit, surgery, or all of the above. Why bother with adhesive bandages?

I would have received better results if I’d actually severed the finger. Clearly, it’s time to sharpen that bread knife.