There is No Japanese Word for “Vegan” 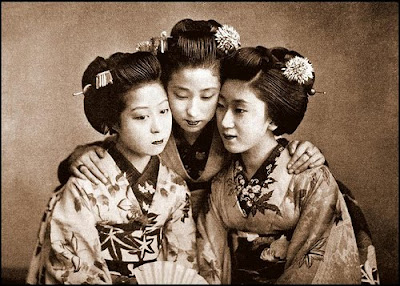 Mr. Wright and I have been collecting every bit of information we can find about Japan, in preparation for our trip this month. We’ve Googled; we’ve Wikipediaed; we’ve talked to friends who lived in or traveled to Japan.

A study guide we found advises we will be expected to remove our shoes and wear slippers when visiting a home in Japan. The slippers are to be worn at all times indoors, except when using the bathroom, where “house slippers” are to be replaced with “toilet slippers.” Care must be taken not to forget to change out of the toilet slippers before returning to other rooms of the house. A girlfriend from college, who lived in Japan for several years, added that it’s regarded as unsanitary to put a nude or almost-nude foot into guest slippers; and she suggested I take footie socks along to slip over my stockings.

The same guide discusses after-hours business meetings, which may include dinner and drinks, which our hosts will insist on paying for. The guide gave a warning that “hostess bars” are not a good idea for businesswomen to attend, but didn’t say exactly what a hostess bar is.

I mentioned this warning to Mr. Wright, and suggested that Japanese hostess bars may be akin to American “gentlemen’s clubs.” Mr. Wright disagreed, opining that “Hostess bars” were probably establishments where Twinkies, HoHos and Ding Dongs were served.

“Probably not a good idea for businesswomen who are watching their weight,” he said. “The book probably just left that last part out.”

One of our Japanese colleagues who will be traveling with us tells me “hostess bars” are simply high-priced clubs that provide expensive atmosphere and sake, but I’m not sure I believe him.

If he and Mr. Wright head out to a hostess bar, Mr. Wright had better come back smelling like chocolate and cream filling. Enough said.

Business cards have a level of importance and regard in Japan not seen in the United States. We may be accustomed to casually handing over our business card, or taking an acquaintance’s card and haphazardly slipping it into a pocket or handbag. Not so, in Japan. The Japanese regard business cards with particular reverence. A business card is a serious thing, recording the bearer’s credentials. It is to be offered – and accepted – with two hands and a slightly bowed head. The receiver of the card should take a few moments to study the card, absorbing and carefully committing to memory the information contained upon it. We will be expected to solemnly study and “understand” the card, even though we don’t read Japanese.

It’s all about ritual.

I was relieved to hear that many of the Japanese read some English, even if they don’t speak it; and some may even attempt to speak English with us. While I found the knowledge comforting, it made me regret my lack of foreign language education. Most developed nations in the world have at least a basic understanding of our language. How arrogant are we Americans to assume that everyone else in the world will speak our language, when our schools – with the exception of a small percentage of bilingual and immersion schools – only teach foreign languages as a college-prep offering?

I feel rather ashamed that I speak no Japanese, yet will be interacting with the people of Japan for a week.

At a pre-travel meeting with our team, I asked our Japanese colleague, “Is there a Japanese word for ‘vegan?’ Or is it such a strange concept in Japan, no one ever needs to say it? Will I be able to eat in Japan?”

After a moment of consideration, he answered, “It’s really the latter. You might want to pack some food to take along.”

If you’re in Japan this month, stop by and say, “Kon'nichiwa.” Or, “Hello,” if you want me to understand you. I’ll be the ignorant American with footie socks and a peanut butter and jelly sandwich, peering in the windows of the hostess club.