The Curse of the Mothers 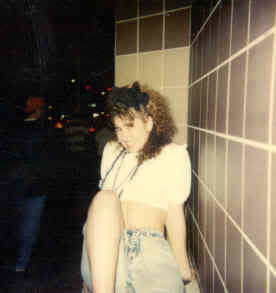 (Yeah, that's me. That photo was taken in May of my senior year of high school. What a hottie, huh?)

When I was about sixteen years old, my mother expressed her earnest desire that, someday, I would have a daughter just like me. I wish I could say that her statement was a well-wishing of sorts; that I was a model child and the greatest possible blessing my mother could bestow upon me was her hope that I, too, would someday parent such a virtuous daughter.

Sadly, the truth is that I was a rebellious, defiant teen with a vulgar mouth and a temper that erupted like buckshot, peppering and wounding anyone within projectile distance. When my mother said, “I hope you have a daughter just like you, someday,” it wasn’t a good thing.
It was the Curse.

The Curse has plagued my maternal family tree for generations, and the catalyst for its invocation seems, routinely, to be a matriarch finally reaching the end of her proverbial rope. Muttered in quiet moments of desperation or shouted in a fiery rage, the Curse is utterly irrevocable and completely effective.

My great-grandmother took no chances when it came to spiritual warfare. She refused to allow even a deck of playing cards into her home, as cards of any type are, clearly, instruments of the devil. (An insanely ironic but fun fact about my great-grandmother is that she was known to read tea leaves, and by all accounts, was quite accurate. Let’s review: Divination is bad, unless it takes the form of reading tea leaves.) Devout Christian that she was, my great-grandmother sought to raise my grandmother with the purest of hearts and to keep her safe from the ever-present devil that, to this day, lurks behind every tree and around every corner.

Had my great-grandmother not been so stubborn, she would have literally died of horror when my teenaged grandmother asked permission to go to the community social. After all, there was to be dancing, and Lord knows – the devil loves to dance. Confident that her sweet, properly-raised daughter would make the decent and Godly decision, Great-Grandma said, “I’m not going to tell you that you can’t go, but I want you to know that if the good Lord comes back to Earth while you’re in there dancing, He’s not going to come in after you!”

My grandmother danced not only that night, but many more besides. She eventually went on to win the local “Charleston” competition three years in a row – because she could perform the entire dance on her toes! No one is certain of the precise moment Great-Grandma uttered the Curse, but it is largely accepted that the breaking point may have been a photo and newspaper article about the local “dancing girl” star.

Grandma, having narrowly escaped the fires of hell, grew to raise three daughters herself. My mother, a teenager in the heyday of the micro-mini, fulfilled the prophecy of the Curse by challenging her mother’s hemline requisites and—hold on to your pillbox hat, Grandma—riding around on the back of her boyfriend’s motorcycle. The Curse was handed down in short order, as you can imagine.

And then, there was me, by far the worst of them all. I was a sullen, brooding teen who cursed like a trucker, snuck out to get drunk and smoke pot with boys and insisted on sending my allowance to Greenpeace. I got in trouble for stealing a school vehicle (it really was just a misunderstanding) and elevated mother-daughter conflict to new heights.

One night, I came home puking-drunk (Lord help me, it was actually Mad Dog). As my mom held my hair back, she unleashed the condemnation of the Curse, willing that I, too, should have a daughter so reckless. I deserved such a fate, after all I put my mother through.

As luck would have it, my body decided, after the birth of my son, that it would not tolerate any more childbearing. I’d done it! After generations, I’d beat the curse! There would be no “daughter just like you” for me, because I wouldn’t have a daughter at all!

It’s a long story, but today, I have five daughters… The Curse lives on.

Blurted by Christina-Marie Wright at 4:38 PM