It's October. Let's Talk About Breasts! 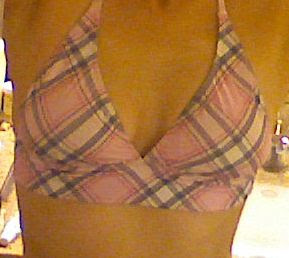 October is National Breast Cancer Awareness Month, and everyone is talking about breasts. That’s a good thing. Breast cancer is an ugly disease, and a cure needs to be found. Frankly, though, I’m not a huge fan of my own breasts.

I’m not saying they’re a bad set, as far as breasts go. It’s just that they don’t serve much purpose beyond filling out sweaters and giving Mr. Wright something to comment on when I get out of the shower. “Hey, Mama, you’ve got some sweet ‘stuffs’ there! Need any help drying them off?”

The “girls” have served me well. They’ve nourished a child. They’ve caught the bartender’s eye to get me quick service in a crowded nightclub. They may have even helped me get out of a speeding ticket or two.

I was drying off after a shower (Mr. Wright was in the other room and had somehow failed to offer assistance) when I hit an extremely painful spot. Instinctively, my hand went to the source of the pain – a lump, about the size of a quarter.

He came running. “What? What is it? Is it a spider? Did you forget to vote in the last primary? Good God, woman! WHAT IS IT?”

I grabbed his hand and pressed it to my boob. “Feel!”

“No… THIS.” I placed the tip of his index finger directly on the lump.

He frowned. He felt some more. He frowned harder. “What is that?”

“I don’t know!” I cried. “It wasn’t there last week! If it’s cancer, and it grew that fast, I’m going to die! Think of the stories you hear about people who are fine one day, and then dead a month later from some cancer they got that just GREW! That grew so fast that the doctors couldn’t DO anything! I’m going to DIE!”

We called for an appointment, and learned the next available date was a week away. I called old friends, announced I was dying, confessed lies I’d told but never been caught in, assigned favorite books of poetry to writer friends… “I don’t know if I’ll have time to make a will, but I want you to have my favorite collection of Rumi poems…”

When the day finally came, I sat, crying, in the waiting room, praying that Mr. Wright’s meeting would get done early so I didn’t have to hear the news alone.

“That’s a really big lump,” the doctor confirmed. “We’re going to do a mammogram and an ultrasound, then we’ll assess it.”

Mammograms are as uncomfortable as everyone says they are. I won’t bore you with the details. As the ultrasound technician pulled a paper “drape” over my chest, I continued to cry. I looked at the monitor as the ultrasound device rolled over my breast, alarmed at the series of dark spots it revealed. It appeared that half of my breasts were made up of the sinister darkness. “Oh, God,” I whispered. “I have cancer, don’t I?”

I looked away from the screen, wiping my eyes, as Mr. Wright walked into the room. I’d never needed him to hold my hand more than in that moment. The doctor entered the room and surveyed the screen. “It’s not cancer,” she announced. “It’s fibrocystic breast disease.”

“Not from this,” the doctor assured me.

Fibrocystic breast disease is a very common – yet rarely discussed – condition which causes my cha-chas to produce painful, non-cancerous lumps. It’s estimated that 30-60% of women may suffer from this condition, and there’s no clear consensus on what causes it.

“There are some things you can do to diminish the growth of the lumps and discomfort,” the doctor advised. “Avoid fatty foods. Avoid caffeine…”

Blurted by Christina-Marie Wright at 6:42 AM