... the amazing people I get to meet.

When I found myself planning to be in San Diego, California for the National Association of REALTORS conference I sent a tweet to Opus_6, an amazingly strong conservative blogger (who does her thing here), telling her that I was going to be hosting an 80s party for the REALTORS and all but begging her to attend.

San Diego was a couple of hours away, she said, and she'd be there, with her kids tagging along. I was so excited I could hardly contain myself. After all, Citizen Gonzo was launched following a discussion with Opus. Her endorsement of my launch helped me to see over 300 hits within 36 hours of Citizen Gonzo going live. So, you see, she's more than a fellow blogger. She's a mentor.

When she arrived, I was still lacing up my boots and applying bright green eyeliner (remember I said it was an 80s party?). It was a bit before the party started, and I was grateful that we had a few quiet moments before the rush of REALTORS appeared.

Opus is the real deal. She's passionate about following and posting issues that are important to the welfare of our country. She's blindingly beautiful but completely down to earth and the epitome of a "real" mom. She can carry on a conversation while chasing a four year-old down the hallway. She makes professional contacts with a two year-old on her hip. She has reasonable but firm limits for her children. In all, she's amazing, and I'm so glad I had the chance to meet her.

Once the party attendees started arriving, things got noisy (some had been to earlier parties and had a head start on the drinking) and crowded. Opus gave some advice to a few REALTORS on using Twitter to boost their business, collected a few business cards, and announced it was time for her and the boys to leave. It was getting late, and they still had a two-hour drive home to their beds. I walked her to the elevator, gave her and the boys hugs, and started back to the suite before I realized we didn't have a picture. What was I thinking?!

I chased them down to the lobby, where a random guy with a Harry Potter scarf took this photo for us: 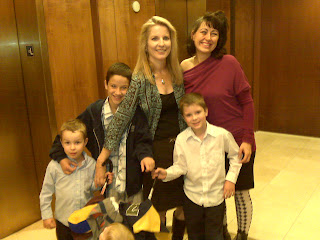 (Note the side ponytail, off-the-shoulder sweater dress and spangled tights. I was born in 1975. Most of my 80s fashion is just a guess.)

I headed back up to the party, poured myself a drink, and played hostess for a while before Joe Spake - REALTOR, blogger and Twitter enthusiast - arrived. I first met Joe in person at a Tweetup in Washington, D.C. last May, where I developed an instant crush on his mini business cards and an appreciation for his warm, open personality and sense of humor. Since then, I've enjoyed reading his blog on real estate and the Memphis area, and I was super-excited to see him walk through the door of my suite.

Joe had a bit of heartbreak at the conference when he lost his prized camera. Unfortunately, no one turned it in. Fortunately, however, he was able to get a new one, which he used to snap this photo of yours truly and my one true love: 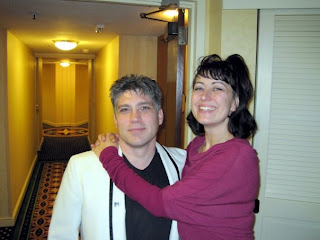 Do I have any photos of Joe (or anyone else, for that matter)? No, because I never seem to remember to take any.

The day after the party, I got a Facebook message AND a Twitter direct message (so I KNEW it was urgent) from Joe, telling me that Derek Overbey of Roost.com wanted to interview me. I was nursing a hangover and touring Petco Field, but promised I would hook up with Derek for the interview as soon as I got back.

"As your PR guy, I command you to get that interview," Joe had tweeted. Alright, I was going to do it, even though I had no idea what the interview was about. I was not even going to be deterred by the fact that wine was served with lunch at the ball park. If anything, that fact may have strengthened my resolve to do the mystery interview. Did I mention I met Heath Bell, of the San Diego Padres? He's not, as far as I know, a blogger, but a nice guy nonetheless. 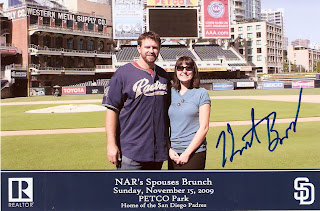 I connected with Derek after the tour, informed him that, after four straight days of partying, he'd be getting my sexy Kathleen Turner voice, and agreed to answer whatever he asked. "Work on overcoming your shyness," Joe had advised me. I think he was kidding. I tend to be highly animated, talk with my hands a lot, and jump from one thing to the next with very little - if any - warning. I'm fairly certain video is not the best medium for me.

Anyway, Derek is part of a really cool project called 100 Interviews. If I understand correctly, it all started at SXSW, where Derek and his posse interviewed 100 people in 4 days. Now, they interview people wherever they might find them. Derek found me. Lucky guy.

Derek, himself, is high-energy and professional. It was a pleasure to meet him. Check back with 100 Interviews - I'm sure I'll be up there soon. You simply must promise not to laugh or count how many times I say, "you know" or "ummmmm."

It's times like these that I realize I lead a very, very charmed life. I'm a very lucky girl!

Blurted by Christina-Marie Wright at 11:35 AM